Native Canadian filmmaker Alanis Obomsawin is of Abenaki descent. One of the most prominent Native Canadian filmmakers, Obomsawin has produced and directed more than thirty documentaries on First Nations culture and history for the National Film Board of Canada for more than thirty-five years. Prior to filmmaking, Obomsawin was as a singer and songwriter. Her most recent film, "When All the Leaves Are Gone," premiered in2010 at the Montreal World Film Festival. Other recent credits include GENE BOY CAME HOME (2007); WABAN-AKI: PEOPLE FROM WHERE THE SUN RISES (2006); SIGWAN (2005); and OUR NATIONHOOD. Obomsawin's best-known documentary is KANEHSATAKE: 270 YEARS OF RESISTANCE, (1993), the first of four films documenting the 1990 Mohawk uprising in Kanehstake.

Obomsawin has received numerous accolades and awards for her work and, in 2006, became the subject of the first-ever book on Native filmmakers in Alanis Obomsawin: The Vision of a Native Filmmaker, by Randolph Lewis. Obomsawin was also honored with the Outstanding Achievement Award and a special retrospective of her work at the Hot Docs film festival in the spring of 2009. A retrospective her work was also held at the Museum of Modern Art in New York City. In her native Canada, Obomsawin was honored with the Governor General’s Performing Arts Award for Lifetime Artistic Achievement, at Rideau Hall in Ottawa. She has also made a name for herself in the art world as an engraver and print-maker. (07/12) 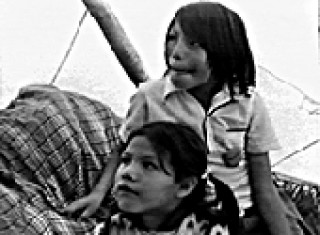 Mother of Many Children

Composed of a series of vignettes featuring Native women from different first nations, this classic work by Alanis Obomsawin, an Abenaki, reflects a proud matriarchal culture that for centuries has been pressured to adopt the values and traditions of white society. By tracing the cycle of Native women's lives from birth to childhood, puberty, young…