Author and filmmaker Anne Cottringer was born in Niagara Falls, Ontario, Canada. She received her bachelor’s degree from the University of Western Ontario before moving to London, where she studied at both the Slade School of Fine Art and the Royal College of Art. Cottringer then began work as a freelance cinematographer and director of film and television, traveling extensively to make documentaries for British television in Africa, South America, India, and throughout Europe. She continues to work in the film industry. though after the birth of her first son, her focus has shifted to writing. She has gained success as the author of several children’s books, including Ella and the Naughty Lion, Danny and the Great White Bear, and Bruna. Her first children’s novel, Singing It, was short listed for the Young Minds Book Award 2008. She lives in Hereford, England and continues to write between freelance jobs. (07/09) 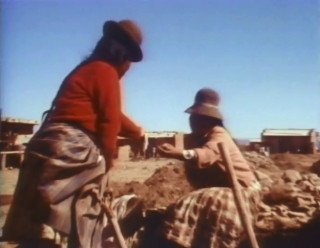 A moving and politically sophisticated analysis of the international debt situation through the eyes of the women of Bolivia, the poorest country in Latin America. Although most directly affected by government austerity programs, peasant women are assumed not to understand the workings of international capital and foreign policy. HELL TO PAY poignantly contradicts such assumptions…