Caroline Martel is a documentary artist who was born in Montréal the year the cellular phone was created (1973). She has been synthesizing documentary theory and practice in a variety of projects since 1998, with a special interest in archival materials, cinema history, women and communication technologies.

HOLD THE LINE (Dernier Appel, 52 min, National Film Board of Canada, 2001) was her début in professional filmmaking, following a number of short documentary videos and some student fictional pieces in 8mm and 16mm (First Prize - College Category - International Montréal Short Film Festival for L’Univers du matelas, 1992). Sound artist and radio practitioner, she received the MIX96 Prize for a documentary series: RADIO DANS L’AIR (1994). Caroline has authored online pieces for the International Festival of new Cinema and new Media of Montréal (FCMM, 1998) and for the Inter-Society for Electronic Arts (1999). She is also programming coordinator at Studio XX, Montréal’s women’s new media arts centre devoted to technological exploration, creation and critique.

BA in Communications and M.A. in Media Studies from Concordia University, Caroline received the Québec Government’s FCAR Master’s Degree Scholarship. She has worked as researcher and as research assistant, notably with filmmakers Marilù Mallet and Sophie Bissonnette and with scholars Chantal Nadeau, Kim Sawchuk and Martin Allor. Collaborating with the Cinémathèque québécoise, she was the main researcher and writer of the virtual exhibit De Nanook à l’Oumigmag on the history of documentary filmmaking in Canada (Boomerang Prize, 2001). In 2002, she directed the production of the interactive workshop Documentary Visions at the Cinérobothèque of the National Film Board of Canada, about documentary movements at the NFB since 1939. (8/14) 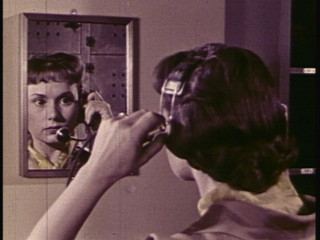 This wry and delightful found-footage film reveals a little-known chapter in labor history: the story of female telephone operators’ central place in the development of global communications. With an eye for the quirky and humorous, Caroline Martel assembles a dazzling array of clips – more than one hundred remarkable, rarely seen industrial, advertising and scientific…