Cathy C. Cook has been creating films, videos, poetry films, collages and installations since 1982. IMMORTAL CUPBOARD: IN SEARCH OF LORINE NIEDECKER won a Jury Award at the 2009 Wisconsin Film Festival and was nominated for the Best of Documentary at the 2010 Beloit International Film Festival. The film has screened at the Anthology Film Archives and the Bowery Poetry Club in NYC and was part of the 2009 fall for the Book Festival at George Mason University and screened in San Francisco in spring of 2010. IMMORTAL CUPBOARD was aired on Wisconsin Public TV along with an interview during the show, "Director's Cut." Starting in summer of 2012, Cook's new project will take her to the largest migration locations for Whooping Cranes and Sandhill Cranes to work on the "Cranes in Motion Project." In 2012, she received a research grant from UMBC to develop and produce this new work. This project will include collages, moving images and installations.

Cook has exhibited her award-winning work extensively in both solo and group shows including screenings at MOMA and the Whitney Museum. Recently her poetry film #536 was included in the Rattapallax #17 and her film TAR GUYS was in the 2008 Zebra Poetry Film Festival. In 2001, Cook was awarded a Guggenheim Memorial Fellowship. Currently she is an Associate Professor in Visual Arts at The University of Maryland Baltimore County (UMBC). Prior to moving to Baltimore, Cook worked in New York City for eleven years as an Art Director in the Film/TV industry. While in NYC, she also taught Film/Video production and Animation at various New York area colleges. (8/14) 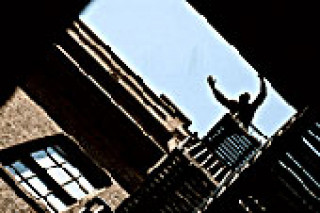 Acclaimed filmmaker Cathy Cook (THE MATCH THAT STARTED MY FIRE) breaks new cinematic territory by devising a new visual language that explores the psychological and emotional effects of physical confinement in her latest film, BEYOND VOLUNTARY CONTROL. Stimulating the senses through haunting and poetic images, the film imaginatively conveys the obsessions, phobias and illnesses constricting…