Documentary director and producer Deeyah Khan has won two Emmys, a BAFTA, an RTS and two Peabody Awards in over a decade of making empathetic and unflinching films which deal with some of the most important and polarizing issues confronting the world today; extremism, violence against women, inequality, racism and social exclusion.

Deeyah has filmed with battle-hardened jihadis, members of armed militia groups, American domestic terrorists and white supremacists, with incisive, illuminating and often surprising results. After she spent over a year filming with members of the United States’ largest neo-Nazi organization, including filming them on their notoriously violent march through Charlottesville in 2017, three high-ranking figures, including the leader, left the movement and rejected its white supremacist ideology. All of them credit their encounters with Deeyah as the catalyst for them to leave the extremist movement.

The Times of London says of her: "She is one of the bravest, most indomitable women... facing down bullies and extremists with intelligence and unflinching spirit.”

Born in Norway to Muslim immigrant parents, Deeyah’s experience of the beauty and the challenges of living between different cultures shapes her creative vision, informing the emotional honesty and humanity which characterizes her films.

Released in 2012 Banaz: A Love Story, her first multi-award-winning documentary, chronicled the life and death of Banaz Mahmod, a young British Kurdish woman murdered by her family in a so-called honor killing. Deeyah's second film, the Bafta-nominated Jihad in 2015, involved two years of interviews and filming with Islamic extremists, convicted terrorists and former jihadis. White Right: Meeting the Enemy, in which she interviewed key figures of the American far right, won her a second Emmy award in 2018. More recently, the BAFTA award-winning film America’s War on Abortion saw Deeyah explore one of the most divisive issues in American politics, while Muslim in Trump’s America charted rising Islamophobia and hate crimes against Muslims against a background of political and online hatred and division. The latter film won Deeyah a second Peabody Award.

In 2010 Deeyah founded her media, arts and education company Fuuse, with the aim of creating space for more inclusive and diverse stories; in 2016, she was appointed the first UNESCO Goodwill Ambassador for Artistic Freedom and Creativity.

Deeyah is increasingly sought after as an advisor and speaker for her unique insights and her skills in listening- and empathy-based approaches to conflict resolution. Her method of building connections across social, racial, and personal divides, honed over ten years of filmmaking on the frontline, aims to deepen understanding through achieving a recognition of our shared humanity, and building a new way of being in the world based upon our inter-connectivity. (08/21)

In this BAFTA award-winning film, two-time Emmy and Peabody award-winning filmmaker Deeyah Khan examines the erosion of reproductive rights in the United States, foregrounding the stories of those often forgotten in this ‘war’ who nonetheless find themselves on its frontline: impoverished women and women of color. Khan films at abortion clinics which are under siege…

END_OF_DOCUMENT_TOKEN_TO_BE_REPLACED

Since 2015, anti-Muslim hate groups, conspiracy theories and hate crimes have risen in the United States.  In this Peabody Award-winning exposé,  Deeyah Khan explores the connections between this increase in hate-driven incidents and state-endorsed  racism  and  investigates what it's like to be Muslim in a country where many people feel they don’t belong.   Filmed  before and during the coronavirus…

END_OF_DOCUMENT_TOKEN_TO_BE_REPLACED 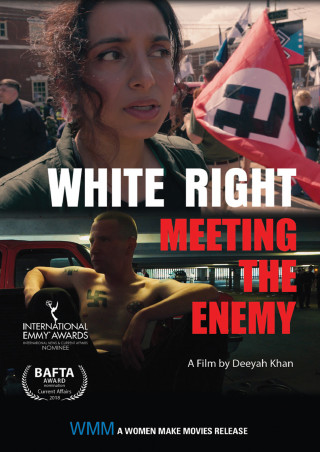 In this Emmy-winning documentary, acclaimed Muslim filmmaker Deeyah Khan meets U.S. neo-Nazis and white nationalists including Richard Spencer face to face and attends the now-infamous Unite the Right rally in Charlottesville as she seeks to understand the personal and political motivations behind the resurgence of far-right extremism in the U.S. Speaking with fascists, racists and…