The majority of her documentary and experimental work deals with gender issues and how female identities and femininities are constructed and complicated. Her film and video work has been shown both at festivals across the country, including Women in the Directors' Chair in Chicago, South by Southwest in Austin, Texas, the Dallas Video Festival, and the Culture Under Fire Festival in Kansas City. Her work has also appeared on Image Union, a PBS showcase in Chicago for independent film and video. She has been invited to show her work and speak about feminist documentary practice at international academic conferences such as the Visible Evidence Conference on Documentary and Consoling Passions Conference for Television, Video, and Feminism, and the National Feminist Graduate Student Conference. She has received grants for her work from the Texas Council for the Humanities, the Austin Film Society's Texas Filmmakers' Production Fund, the Dallas Chapter of Women in Film, and the Liberace Foundation for the Performing and Visual Arts. As a media educator, she teaches production skills to children, teenagers, and college students. 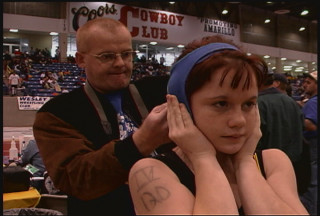 GIRL WRESTLER follows 13-year-old Tara Neal, a Texas teenager who upsets traditional expectations by insisting that girls and boys should be able to wrestle on the same mat. Zander follows Tara through a crucial period in her wrestling career—the last year that she is allowed to wrestle boys under state guidelines. When Tara enters high…