One of only a handful of female African filmmakers, FANTA RÉGINA Nacro studied at the INAFEC film school in the Burkina Faso capital, Ouagadougo, and earned a master’s degree from the Sorbonne in Paris. In a career spanning more than 20 years, she’s depicted Africa’s traditions and harsh realities, but she often turns her lens with comic joy on issues of sexuality, gender relations, and modernity. In 1993 she founded her own production company, Les Films du Défi, whose mission is to create, produce, and distribute films, support new filmmakers, and raise awareness of African films. She has won two dozen awards for her work in festivals around the world, from Cannes to San Francisco. She lives and works in Burkina Faso, the West African land formerly known as Upper Volta. (7/12) 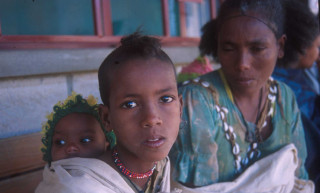 A rare collection from the emerging voices of African documentary filmmaking, this unique series daringly explores the social and cultural realities experienced in Africa today – including the infiltration of Western beauty standards, territorial displacement and high unemployment. FANTACOCA by Agnes Ndibi (23 minutes) presents the disturbing cultural phenomenon of skin bleaching in Cameroon and…