Hazel was born in Bogotá, Colombia and raised in New York City. After graduating from Columbia University’s Graduate School of Journalism, she worked in long-form television production for ABC News, A&E, PBS/Frontline, HBO, and HISTORY. Hazel Co-Produced two hours of The African Americans: Many Rivers to Cross with Henry Louis Gates, Jr., which was honored with an Emmy, a Peabody, an Alfred I. duPont-Columbia baton, and the NAACP Image award.

Hazel then Produced Roots: A History Revealed, which was nominated for a NAACP Image Award for Outstanding Documentary Television and screened at the Bushwick Film Festival in 2016. In 2017, Hazel produced a five-part, digital-first, short-form docuseries about the daily lives of low-income New Yorkers called, My Everyday Hustle for PBS/WNET’s, multi-platform public media initiative, Chasing the Dream: Poverty & Opportunity in America.

Continuing to collaborate with Dr. Gates over the years, Hazel has directed and produced six hours of the celebrity genealogy series Finding Your Roots, with another four episodes scheduled for broadcast beginning in January 2019. Storming Caesars Palace (w.t.), which has received support from ITVS’ Diversity Development Fund and Firelight Media, is her first feature. (1/23) 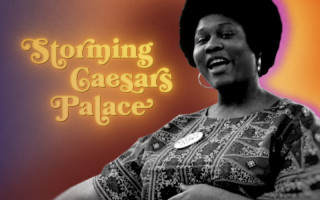 STORMING CAESARS PALACE chronicles the extraordinary life of Ruby Duncan, an activist who fights the welfare system and becomes a White House advisor. Ruby, along with Mary Wesley, Alversa Beals, and low-income mothers across the country form the National Welfare Rights Organization to fight for an adequate income, dignity, and justice. Together, they introduce a…