Jane Caputi is a Professor of Women, Gender and Sexuality Studies at Florida Atlantic University. She is primarily a teacher and writer, with many articles and three books-- The Age of Sex Crime; Gossips, Gorgons, and Crones; and Goddesses and Monsters: Women, Myth, Power and Popular Culture. She also collaborated with radical feminist philosopher Mary Daly on Websters’ First New Intergalactic Wickedary of the English Language. Jane was awarded several grants from a New Mexico family foundation that enabled her to conceptualize, script, and gather the imagery to make two documentary films, The Pornography of Everyday Life (2006) and Feed the Green: Feminist Voices for the Earth (2015). Jane worked closely with producer Susan Rosenkranz on both.

A native New Yorker, Jane was raised on Long Island in a large Italian-Irish Catholic family. As a very young child, she gravitated toward some of the traditions imbued with pagan peasant mysticism, but rebelled at an early age against the patriarchal abusive authority of the Church and its misogyny, its oppressions of women and gay people, and fundamental sex-negativity. She finds that pattern of exploitation replicated in the larger culture, including the earth-abusive culture.

Recognizing the gamut of men’s violence against women - physical, emotional and psychological - was one of the original spurs for Jane to become a feminist. But, at the same time, she understood that this abusive tradition inverted an earlier, vital knowledge tradition of sacredness associated with sexuality and coupled with spiritually-based politics of social justice.

As an undergraduate at Boston College, she first met Mary Daly, whose writings and teachings propelled Jane into a lifetime of psychic as well as physical activism. Daly, along with other mentors and friends including the Native American philosopher, poet and novelist Paula Gunn Allen, and the experiences of nearly thirty years of teaching and learning from students, deeply enriched her mind and spirit.

Caputi’s first academic job was at the University of New Mexico. Teaching and living there -- learning from the people and the land -- qualitatively changed her as she encountered the depth and necessity of indigenous philosophies, as well as the power of that place. In these philosophies, human language, dreams, stories and ideas come from the land and humans have great responsibilities to the land and to the life force/source.

Feed The Green: Feminist Voices for the Earth was inspired by one of the most powerful dreams that ever came to Jane, giving her the phrase "Feed the Green." We do this in multiple ways - material, intellectual, spiritual, emotional - listening to and responding to the call of the Green, always returning energy to the Source. (3/16) 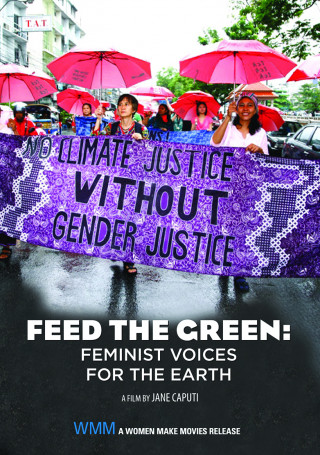 Feed the Green: Feminist Voices for the Earth

FEED THE GREEN: FEMINIST VOICES FOR THE EARTH challenges the cultural imagination surrounding the destruction of the environment and its impact on femicide and genocide. This informative documentary, by Women, Gender and Sexuality Studies professor and scholar Jane Caputi, highlights an active global resistance movement and an alternative imagery communicating resistant green consciousness. FEED THE…