Joyce Warshow (Producer/Director) is a psychologist turned filmmaker. She received her training at Film and Video Arts, and at the Hunter College Department of Communications, where she studied under the filmmaker Tami Gold. She is also the recipient of two production grants from Women Make Movies for her older lesbian activist project, which includes SOME GROUND TO STAND ON, and was also awarded two Astraea Foundation Grants and a New York State Council On the Arts Grant for post production and distribution. Her first video piece "At Last: Portrait of April Martin" is about a 45-year-old bronze medal winner for ice-skating at the Gay Games. She received the Thanks be to Grandmother Winifred Foundation Award for "Portrait of Shevy Healey" (a founder of OLOC {Old Lesbians Organized For Change)-a video work in progress. Since its completion in April 1998, her video SOME GROUND TO STAND ON has played at numerous national and international festivals and has won the Audience Choice Award at the Reel Affirmations Festival in Washington, D.C. and the Director's Choice Award at The Black Maria Film Festival.

Warshow is a psychologist and educator who received a National Institute of Mental Health (NIMH) grant for her doctoral studies completed in 1973. In 1991 she received the "Uncommon Woman Award" from the Legacy Foundation for her work in the early '70s doing workshops primarily for heterosexual psychotherapists working with lesbian and gay clients, and for her co-edited book Lesbians at Midlife: The Creative Transition. She was a contributor to Lesbian Friendships, published by NYU Press. She has been a professor, researcher, author, and psychotherapist who has made numerous presentations at meetings of organizations such as The Feminist Therapy Institute, The Association of Women In Psychology, The Society for the Study of Lesbian Gay Issues (within the American Psychological Association), SAGE (Senior Action In A Gay Environment), and the International Women's Year Conference held in Costa Rica. An activist herself, she did sensitivity training with the police on the possible roots of hate crimes against gays, and is on the organizing committee to plan a town meeting on aging and ageism in the Lesbian Gay Bisexual Transgender community. She received a BA and an MA in literature from Brooklyn College and New York University (Arts and Science} respectively.

In preparation for her lesbian activist's project, a focus group was conducted with activists who were over the age of 45 to determine how these women thought about their activism and what their experiences had been through their involvement in some of the important social movements of their time. Through these discussions, Warshow discovered Blue Lunden, whose personal story, as well as the bravery of her activism she found very compelling. Blue was also a working class lesbian and Warshow felt that little had been documented about the lives of working class butches who were very important in the struggle for lesbian visibility. Additionally, the working class perspective was usually missing in the retelling of the story of the women's movement of the '70s. (09/09) 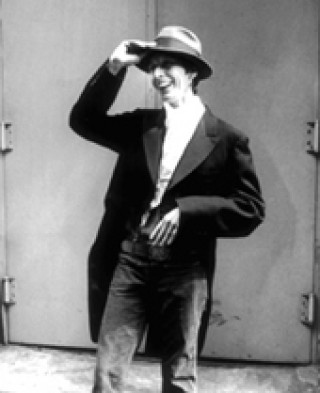 This compelling documentary tells the life story of Blue Lunden, a working class lesbian activist whose odyssey of personal transformation parallels lesbians’ changing roles over the past 40 years. Starting with Blue’s experience of being run out of the 1950’s New Orleans gay bar scene for wearing men’s clothing, SOME GROUND TO STAND ON combines…