Julia Barco, who received her B.A. in communications from Cornell University and M.A. in visual studies at the Massachusetts Institute of Technology, moves between Mexico City and Oaxaca, creating documentaries, fictional films, and experimental media. Barco’s films have been exhibited internationally, and she is the recipient of scholarships in film, video, and multimedia projects from the MacArthur and Rockefeller foundations. She has directed ten films, includeing PREGNANT WITH DREAMS (1988), BEER AND HANKIES (2002), and ADELINA, PRESIDENT (2003). (07/12) 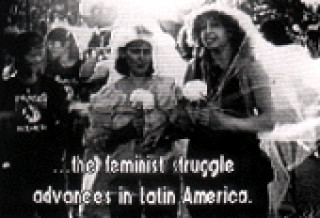 Engaging, intimate and fast-moving, this film reflects the diversity and richness of Latin American feminism by documenting the 4th Encuentro Feminista Latinoamericano y del Caribe which brought together more than 1,200 Latin American women for a week in Mexico in 1987.