Karen Day is a journalist prone to dangerous enthusiasms. As a photographer, filmmaker and writer, she makes a habit of ignoring the punitive warnings of military dictators, Christian and Islamic fundamentalists, the most recent Republican administration and her four children. Consequently, her career includes house arrest in Myanmar, lunch with Dr. Anthrax in pre-war Baghdad, fashion reprimands from a warlord in Kandahar and happy hour with the Dalai Lama in Manhattan. She graduated from the University of Colorado with a BFA and a healthy dose of skepticism toward authority. Wary of overly-earnest appeals from rock stars, politicians and Sally Struthers, her professional pen and camera focus on the human element in every story, whether the subject is war-torn refugees or Hollywood celebrities. A member of the SOCIETY OF PROFESSIONAL JOURNALISTS and REPORTERS WITHOUT BORDERS, she has reported on Afghanistan, Cuba, Iraq, Myanmar, Rwanda and South Sudan for numerous national publications, including NEWSWEEK, O, ELLE, MOTHERJONES.COM, BODY AND SOUL and the LOS ANGELES TIMES. Her independently-produced news features from Iraq have aired on NBC Nightly News with Tom Brokaw, CNN, and BBC. Day is co-producer and host of the award-winning television series on PLUM TV, WOMEN WITH A CAUSE and the documentary, ETHICS AND THE WORLD CRISIS: Conversations With The Dalai Lama. GIRL FROM GOD'S COUNTRY, released in 2016, is Day's 14th documentary. She is co-writer of the book SEAL: THE UNSPOKEN SACRIFICE, about the Navy’s elite Special Operations Forces and in 2016, was contributing author of SILENT WOMEN:PIONEERS OF CINEMA. Partnered with MARIE CLAIRE magazine, Day founded AFGHAN WOMEN'S JUSTICE PROJECT ( www.awjp.org ) which continues to raise awareness and funds to provide literacy teachers and defense attorneys for Afghan women and children imprisoned for moral crimes. Between trips to Afghanistan and the produce aisle, Day produces documentaries and writes children's books with the First Lady of Idaho. She attributes her success to ruthless editing by her nine-year-old son. When not in war-zones or behind a camera, this mother of four shares an Idaho farm with chickens, turkeys, horses, barn cats and a Yeti, their dog. (3/16) 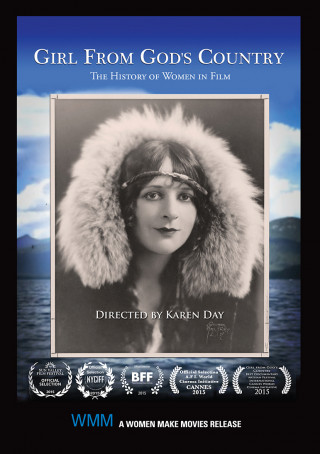 GIRL FROM GOD'S COUNTRY is the untold story of the first female independent filmmaker and action-adventure heroine, Nell Shipman (1892-1970), who left Hollywood to make her films in Idaho. An unadulterated, undiscovered adventure tale of a pioneering woman who rewrote the rules of filmmaking, and, in so doing, paved the way for independent voices–especially prominent…