Karin Jurschick was born in Essen and studied Theater, Film and Television at the University of Cologne. Co-founder of the international women’s film festival Feminale in Cologne, she also worked for five years as an editor for the culture department of the Stadtrevue Cologne monthly magazine. Also active as a writer for radio and television, her award-winning films include: IT SHOULD HAVE BEEN NICE AFTER THAT (2000), THE PEACEKEEPERS AND THE WOMEN (2003), AFTER THE MURDER OF THEO VAN GOGH (2005), NOT ANYMORE (2006), an episode of "24 Hours Berlin" (2008), CERTIFICATE IN GERMAN (2009), THE CLOUD, CHERNOBYL AND ITS CONSEQUENCES (2011), and ON THE RAIL OF EVIL (2012). (8/14) 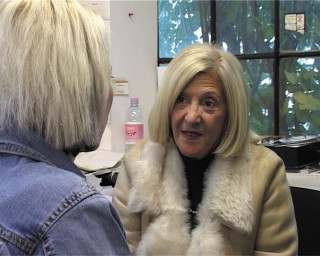 The Peacekeepers and the Women

Winner of the Arte-Documentary Award for Best German Documentary, this chilling investigation examines the booming sex-trafficking industry in Bosnia and Kosovo, and boldly explores the disturbing role of the UN peacekeeping forces and the local military in perpetuating this tragic situation. In 1995, the UN set up a free trade zone in Bosnia, hoping to…