Kimberlee Acquaro is an American filmmaker and photojournalist who, over her career, has been nominated for an Academy Award and has won an Emmy for Best Documentary. Her film GOD SLEEPS IN RWANDA garnered international awards and was featured on HBO. Her work has also been featured on CNN, CBS, NPR, “The Tavis Smiley Show”, “The Voice of America,” BBC/PRI’s “The World” and has been shown in various museums accross the United States including MOMA and the United States Holocaust Memorial Museum in Washington D.C. Acquaro’s journalism work has appeared as The New York Times Magazine cover stories as well as in The Washington Post Magazine, Time Magazine, U.S. News & World Report, Interview, Mother Jones and many international publications. She was awarded a prestigious Pew Fellowship in International Journalism and a Residency at Johns Hopkins School of Advanced International Studies for her work in Rwanda. She also received a Guggenheim Fellowship for her work on race in America through the eyes of African-Americans over the age of 100 in I'LL RISE. Acquaro now lives with her family in Venice, California. (1/20) 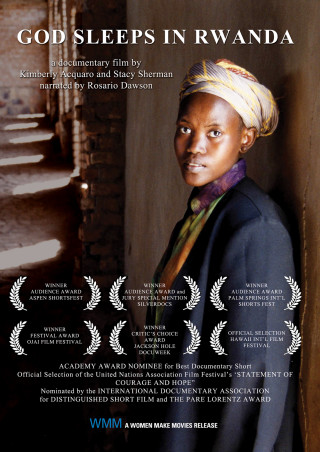 Uncovering amazing stories of hope in the aftermath of the Rwandan genocide, Academy Award-Nominee GOD SLEEPS IN RWANDA captures the spirit of five courageous women as they rebuild their lives, redefine women’s roles in Rwandan society and bring hope to a wounded nation. The 1994 Rwandan Genocide left the country nearly 70 percent female, handing…