Born in Lier, Belgium, Lut Vandekeybus studied Political & Social Sciences at the KUL , (Univerity of Louvain, Belgium.) Successively, she lived in the United States, where she took photography at Hayward University, Spain, Portugal and Mexico.

In 1993 she returned to Belgium to work at the Flemish Theatre Institute in Brussels. At that time she developed her film and video skills and did internships with Walter Verdin (Barcelona, Spain) and at the Stuc Arts Center (Louvain, Belgium). Lut completed the Intensive Light & 16mm Camera course at the Escuela Internacional de Cine y TV in Cuba. In 1996 she founded the production company Khadouj Films vzw (Brussels, Belgium). (09/09) 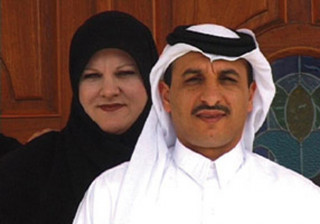 LINDA AND ALI provides a nuanced and intimate look into the life of a traditional Muslim family in Doha, Qatar. But Linda and Ali’s 20-year marriage is far from traditional. Linda was brought up Catholic in Arizona and met Ali – a Shiite Muslim from Qatar – at college in the 1980’s. Shot during the…