After graduating from New York University, Cohen directed and produced a weekly television series called Are You There? that was cited as the "first example of community interactive television" by the National Cable Television Association. In New York City, she became the director of the first public access facility in the country, as part of the Alternate Media Center. At the same time, she set up the distribution system of Electronic Arts Intermix, now the largest distributor of video art in the world. She co-founded the Independent Feature Project and First Run Features, the first company devoted to distributing American independent films.

Cohen directed and produced JOE AND MAXI, a feature-length documentary about her relationship with her father. She participated in the omnibus feature film, SEVEN WOMEN SEVEN SINS, in which seven internationally acclaimed directors re-interpreted the seven deadly sins. In response to the Los Angeles riots of 1992, Cohen directed and produced SOUTH CENTRAL LOS ANGELES: INSIDE VOICES. She gave video cameras to African Americans, Latinos and Korean Americans who lived in the areas most affected by the fires, vandalism and violence of the riots, to learn about the depths of racism from a firsthand perspective.

For more than thirty years, Cohen has been photographing, and more recently filming, in women’s restrooms across the globe, from the Australian outback to Zambian discos. LADIES ROOMS AROUND THE WORLD, a project celebrating women’s courage and creativity while advocating for their rights.

She is currently developing A MOVEMENT IN WATER, a monumental multimedia installation that immerses the viewer in the sublime moving majesty of water and is intended to shift psychology and inspire reverence for water.

For the last five years, Cohen has filmed her family for the upcoming documentary, FIGHTING FOR THE WIND, which will serve as a sequel to JOE AND MAXI. She continues to intimately record her family’s triumphs and tragedies, particularly those of her brother Danny Cohen, as he is poised to build the first offshore wind farm in the Americas off the coast of New Jersey. (8/14) 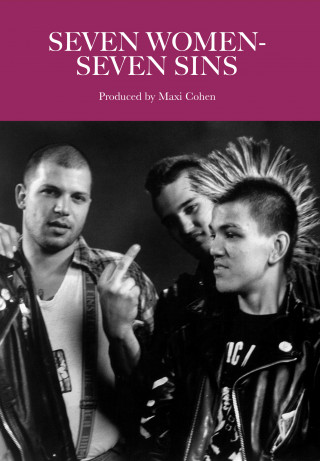 What constitutes a deadly sin today? Seven of the world’s best-known women directors produce their own version of celluloid sin in this omnibus film. Helke Sander (THE GERMANS AND THEIR MEN) reverses GLUTTONY with her vision of Eve forcing her apples into the hands of a reluctant Adam. Bette Gordon (VARIETY, EMPTY SUITCASES) finds GREED…