Born in London in 1977, Poppy began her career at Sydney's 2SER FM whilst completing a degree in zoology at the University of New South Wales. She has since had extensive experience in radio as a freelance producer and program-maker, particularly for the ABC’s national youth station, triple j.

Poppy made the leap to film and television in 2004, studying cinematography at North Sydney TAFE. Her camera credits since have included Walk Like a Man, Suburban Mayhem and The Silence. Her film credits as writer/director include the short Alight Touch and music video Foolscap, and she is regularly commissioned to create travel vodcasts, such as Skiing in Morocco, for Lonely Planet. Most recently, Poppy worked as segment producer on ABC 2’s Good Game.

Poppy’s love for the Gulf of Carpentaria area of Australia has led to a wealth of experience with indigenous content. Credits include Ghost Nets, Road to Gove, Freedom Ride 2005 and Kubin Community, Moa Island Torres Strait.

She is currently living at Bondi Beach in Sydney. (7/08) 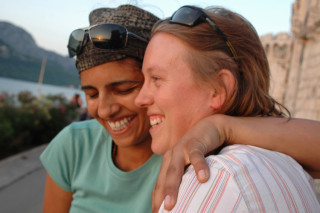 Single, frustrated, and lonely in the middle of Sydney’s thriving gay community, director Poppy Stockell decides to “research” a light-hearted look at the lesbian Internet-dating scene. To her surprise and delight, she forges a deep online connection with an English woman, Sandeep Virdi. When their innocent flirtation turns into true attachment, Poppy sends Sandeep a…