Robert Nassau is a director, producer, and editor based in New York City. His editing credits include the feature documentary "Free Tibet" (1998), released by the Shooting Gallery; and "The It Factor" (2001), a series for Bravo. Other editing clients have included NBC, CBS, PBS, TLC, MTV, and ESPN. His short films, "Hair Story" (1994), "Dog" (1995), and "Telemarketer" (1998) have been exhibited and awarded at film festivals in New York, Boston, New Orleans, Chicago, Austria, Poland, Spain, and Russia. He studied filmmaking at the Rhode Island School of Design and at FAMU in Prague, Czech Republic. (09/09) 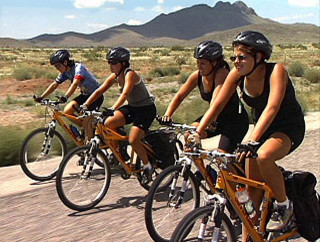 Uphill All the Way

UPHILL ALL THE WAY is the astounding true story of five troubled teenage girls who face the challenge of their lives: a 2,500-mile bicycle journey along the United States Continental Divide. The girls are students at the DeSisto School, a rehabilitative high school in Massachusetts for drug addicts, victims of sexual abuse, and juveniles that…