Ruth Ozeki is a writer, filmmaker, Zen Buddhist priest. Her documentary and dramatic independent films, including Halving the Bones, have been shown on PBS, at the Sundance Film Festival, and at museums and universities around the world. She is the best-selling author of the novels, My Year of Meats, All Over Creation, and A Tale for the Time Being, which won the LA Times Book Prize and the Dos Passos Prize, and was shortlisted for the 2013 Man Booker Prize and the National Book Critics Circle Award. Translated and published in more than thirty-five countries, her books have garnered international critical acclaim for their ability to integrate issues of media representation, science & technology, environmental politics and global pop culture into unique hybrid narrative forms. She is the Grace Jarcho Ross 1933 Professor of Humanities at Smith College, where she teaches creative writing. (07/19) 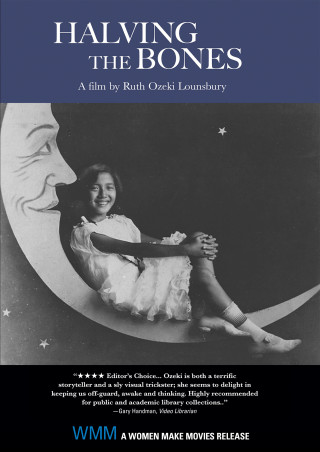 Skeletons in the closet? HALVING THE BONES delivers a surprising twist to this tale. This cleverly-constructed film tells the story of Ruth, a half-Japanese filmmaker living in New York, who has inherited a can of bones that she keeps on a shelf in her closet. The bones are half of the remains of her dead…