Multidisciplinary artist Shelley Niro (1954) is from the Mohawk Nation of the Haudenosaunee (Iroquois Confederacy) and is a member of the Turtle Clan from the Oshwekon, Six Nations Reserve in Ontario, Canada. Born in the United States in Niagara Falls, New York, Niro occupies a space distinguished by her multi-nationality. Her inherent right to belong to traditional territory overlapping colonial borders supports her fluid creative perspectives.

Niro’s practice as a painter, photographer, sculptor and filmmaker has garnered acclaim and accolades at many levels, commanding critical attention including an Eiteljorg Fellowship and the Woman in Film/GM Acceleration Grant. Her contemporary Indigenous perspective is based upon traditional knowledge; her sense of community and colonial critique re-contextualized through matriarchal wisdom, metaphor, masquerade and related expressions of sovereignty. In her flirtatious work Mohawks in Beehives (1990), a hand-tinted photographic series, Niro re-introduced the world to the complex nature and authority of the matriarch, a figure from traditional and contemporary societies that was oppressed under forms of colonialism. By re-addressing matriarchal matters, Niro confronts forms of power, stereotypical attitudes, sexuality, and society. Her aesthetics are doused with humor, play, adornment, and kitsch. (8/14) 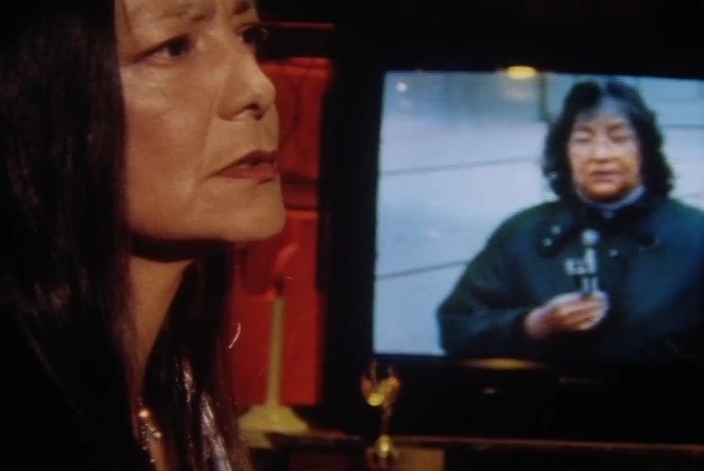 This all-Native production, by director Shelley Niro (Mohawk), is part of the Smoke Signals new wave of films that examine Native identity in the 1990’s. Set on the Grand Pine Indian Reservation, aka “Reservation X”, HONEY MOCCASIN combines elements of melodrama, performance art, cable access, and ‘whodunit’ to question conventions of ethnic and sexual identity…