Producer, director, and editor T. Nicole Atkinson has been working in documentary production for almost a decade. Her first independent project, WORD OF MOUTH (1991), received a student Emmy Award, was screened at a variety of film festivals and broadcast on PBS and internationally in Israel, South Africa, and Ireland. With the late Emmy-winning director Marlon Riggs, Atkinson co-produced BLACK IS. . . BLACK AIN’T, a feature-length documentary on African American identity that received the Filmmaker’s Trophy Award at the 1995 Sundance Film Festival, Best Overall Film and Best Documentary at Black Filmmakers Hall of Fame, and a Golden Gate Award from the San Francisco International Film Festival. Atkinson also worked with Riggs as production assistant, assistant editor and researcher, and associate producer and editor on the Peabody Award-winning documentary, COLOR ADJUSTMENT. The two collaborated again on the award-winning NON, JE NE REGRETTE RIEN (NO REGRET), about HIV disclosure in the black community. In 1997, Atkinson completed LOCKIN’ UP, a half-hour documentary devoted to the exploration of the social and political significance of dreadlocks in African American culture which received third prize in the documentary category from Black Filmmakers Hall of Fame.

Atkinson, graduated with a master’s degree in journalism from the University of California at Berkeley and has an extensive background teaching video production. She has worked with the SAY Project, San Francisco, and the City of Oakland’s Park and Recreations Department, teaching video storytelling to students as young as five years old at a variety of schools throughout the Bay Area. She was also a member of the graduate faculty at the University of California at Berkeley, where she taught television news and documentary production for two years, and has taught at the Academy of Art College in San Francisco. (08/09) 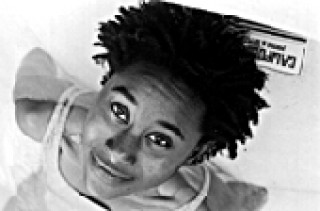 When Jamaican-born filmmaker T. Nicole Atkinson threw away her comb to let her hair coil into dreadlocks, she was forced to challenge both society’s and her own conflicted notions of beauty. Her story and those of other African Americans who have chosen to ‘lock up’ are wittily chronicled in this award-winning, entertaining film. Anecdotes, historical…