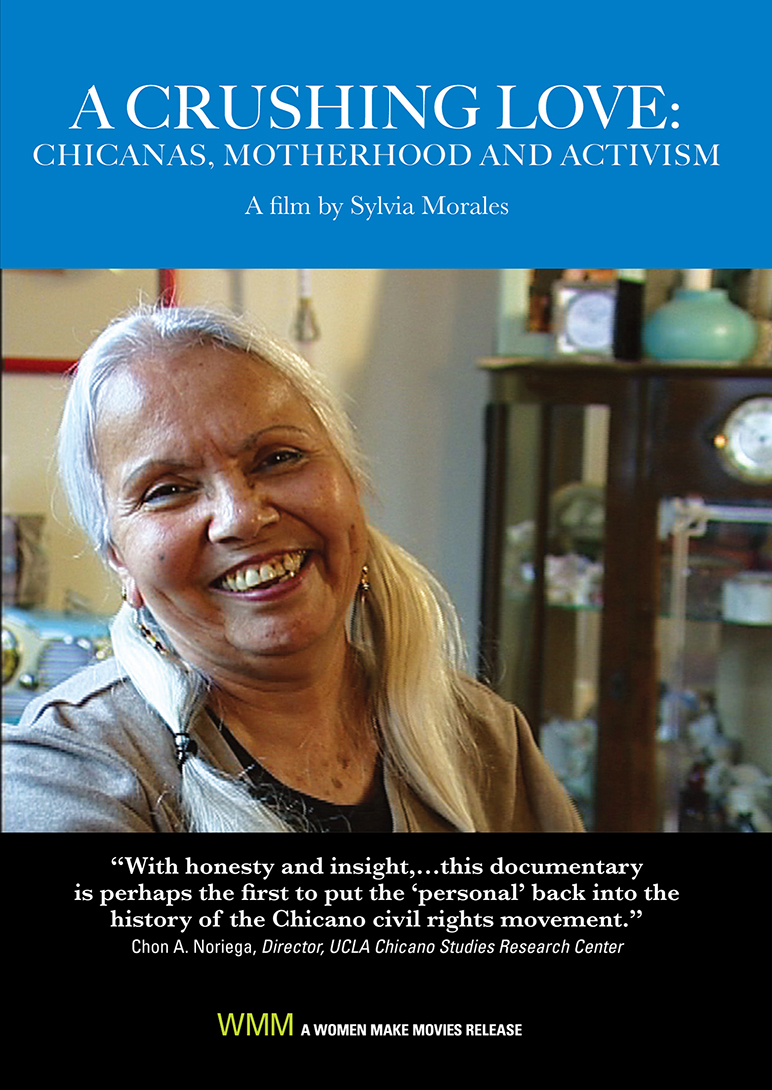 A film by Sylvia Morales

Questions about reconciling competing demands are ones that highly acclaimed filmmaker Sylvia Morales, a working mother of two herself, pondered aloud as she prepared this documentary. Historical footage and recent interviews with each woman reveal their contributions to key struggles for Latino empowerment and other major movements of our time. Both they and their grown children thoughtfully explore the challenges, adaptations, rewards, and missteps involved in juggling dual roles. Scenes of Morales at work and at home, often humorously overlaid with her teenage daughter’s commentary, bring the dilemma up to date. Chicana continues to be used in classrooms more than thirty years after it was made; A CRUSHING LOVE is a memorable sequel which offers us indelible portraits of unforgettable women, including one of Morales herself.

“Morales comes full circle to an unprecedented chronicle of the rich history of US Latina women’s leadership, strength and struggle in the workplace, the family, community, society, the world.”

“With honesty and insight,…this documentary is perhaps the first to put the ‘personal’ back into the history of the Chicano civil rights movement.”

“A critical document on maternity and its challenges, about the crushing force of love for one’s family and community.”

"Recommended...The film does a fine job of combining social history and biography, providing a glimpse of an important social justice movement, along with some of the significant individuals who carried it forward."

Sylvia Morales has directed, written, produced and edited award winning and nationally recognized film and video work for the last 30 years. She directed episodes from the three seasons of Showtimes' groundbreaking series, Resurrection Blvd, working with actors Elizabeth Pena, Lou Gossett, Jr., Michael De Lorenzo and Esai Morales. She also wrote and directed for the Showtime series, Women: Stories of Passion. Morales was one of the producing and writing teams for the award winning series, Chicano! The Mexican Civil Rights Movement for PBS. She directed for the ACE and Emmy nominated six-hour series, A Century of Women, which focused on 20th century U.S. women for Turner Broadcasting, Ms. Morales headed the Latino Consortium at KCET in Los Angeles from 1981-1985. She was responsible for the programming, production and distribution of programs that aired on PBS. During her four-year tenure at KCET, Ms. Morales hosted the Latino Consortium's weekly national series, Presente, and produced and directed Emmy nominated and award winning programs. Ms. Morales produced, directed, shot and edited the widely recognized film, CHICANA, in 1979. Ms. Morales has been the recipient of the following awards: the prestigious Rockefeller Fellowship Award in Media; a participant in the American Film Institute's Directing Workshop for Women; a Fellow from the National Endowment of the Arts; the VESTA Award which honors the outstanding contribution of Southern California women to the arts; and she was honored with a Salute to Latinas Award for distinguished work in her field from the city of Los Angeles. She was also honored by Comision Femenil Mexicana Nacional's 20th Anniversary celebration for "Latinas in Film and Television." (8/14)

CHICANA traces the history of Chicana and Mexican women from pre-Columbian times to the present. It covers women's role in Aztec society, their participation in the 1810 struggle for Mexican independence, their involvement in the US labor strikes in 1872, their contributions to the 1910 Mexican revolution and their leadership in contemporary civil rights causes. Using murals, engravings and historical footage, CHICANA shows how women, despite their poverty, have become an active and vocal part of the political and work life in both Mexico and the United States.
Learn more

Antonia Pantoja (1922-2002), visionary Puerto Rican educator, activist, and early proponent of bilingual education, inspired multiple generations of young people and fought for many of the rights that people take for granted today. Unbowed by obstacles she encountered as a black, Puerto Rican woman, she founded ASPIRA to empower Puerto Rican youth, and created other enduring leadership and advocacy organizations in New York and California, across the United States, and in Puerto Rico. Recognized for her achievements in 1996, Dr. Pantoja was awarded the prestigious Presidential Medal of Freedom, the highest honor bestowed upon civilians in the US. In this important documentary, Pantoja’s compelling story is told through never-before-seen home movies, archival footage, and personal passionate testimony from Pantoja herself and some of her countless protégés, as well as her life partner. Highlighting major landmarks in Pantoja’s biography and long, productive career, the film shows her profound commitment to transforming society, her pivotal role in the Puerto Rican community’s fight to combat racism and discrimination, and her pioneering work in securing a bilingual voice in the US. An eloquent tribute to a remarkable woman, the film sheds new light on the Puerto Rican community’s far-reaching triumphs.
Learn more

NI AQUI, NI ALLA illuminates the challenges facing an undocumented college student and her family. Blanca, a second-year student at the University of California, Berkeley, crossed the border from Mexico into the United States with her parents when she was a child. As a student under the California DREAM Act who possess DACA (Deferred Action for Childhood Arrivals), Blanca qualifies for financial aid and has temporary protection from deportation, though her undocumented parents, who live and work in California's agricultural Central Valley, do not. NI AQUI, NI ALLA paints an intimate portrait of an undocumented family as they support each other during a turning point in their lives and stay together through the distance. At a time in this country’s history where the debate around immigration is highly contested and demands to close the border are in the daily news, NEITHER HERE, NOR THERE paints a very human face on an issue that many use simply as partisan, political fodder. Essential viewing for Anthropology, Sociology and Multicultural and Immigration Studies.
Learn more

Riding at night through streets deemed dangerous in Eastside Los Angeles, the Ovarian Psycos use their bicycles to confront the violence in their lives. At the helm of the crew is founder Xela de la X, a single mother and poet M.C. dedicated to recruiting an unapologetic, misfit crew of women of color. The film intimately chronicles Xela as she struggles to strike a balance between her activism and nine year old daughter Yoli; street artist Andi who is estranged from her family and journeys to become a leader within the crew; and bright eyed recruit Evie, who despite poverty, and the concerns of her protective Salvadoran mother, discovers a newfound confidence. The film Ovarian Psycos rides along with the Ova’s, exploring the impact of the group’s activism, born of feminist ideals, Indigenous understanding and an urban/hood mentality, on neighborhood women and communities as they confront injustice, racism, and violence, and take back their streets one ride at a time.
Learn more
Shopping Cart