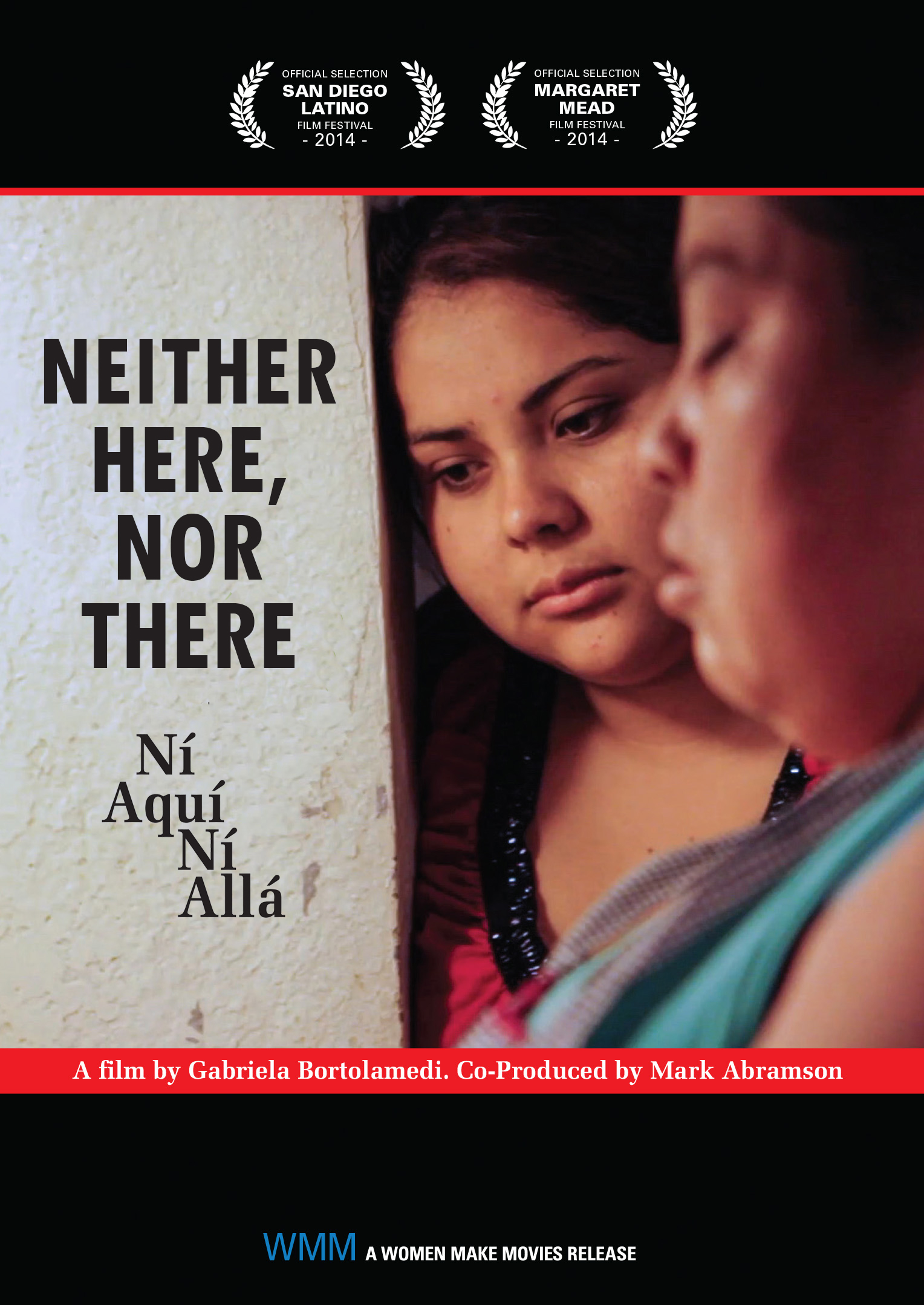 A film by Gabriela Bortolamedi
Co-Produced by Mark Abramson

NI AQUI, NI ALLA illuminates the challenges facing an undocumented college student and her family. Blanca, a second-year student at the University of California, Berkeley, crossed the border from Mexico into the United States with her parents when she was a child. As a student under the California DREAM Act who possess DACA (Deferred Action for Childhood Arrivals), Blanca qualifies for financial aid and has temporary protection from deportation, though her undocumented parents, who live and work in California's agricultural Central Valley, do not. NI AQUI, NI ALLA paints an intimate portrait of an undocumented family as they support each other during a turning point in their lives and stay together through the distance. At a time in this country’s history where the debate around immigration is highly contested and demands to close the border are in the daily news, NEITHER HERE, NOR THERE paints a very human face on an issue that many use simply as partisan, political fodder. Essential viewing for Anthropology, Sociology and Multicultural and Immigration Studies.

Gabriela Bortolamedi is a New-York based filmmaker, anthropologist, and journalist. She hails from Puerto Rico, where she worked as a reporter with the Center for Investigative Journalism of Puerto Rico (CPIPR). She is currently a PhD student at the Program in Culture and Media at New York University, where her films and research focus on the daily lives of undocumented migrants in the United States. Ni Aquí, Ni Allá (2014), which premiered at the Margaret Mead Film Festival, is her first film. (2/15)

Mark Abramson (b. 1988) is a Russian-American freelance photographer and filmmaker based in New York City.

He is drawn to telling stories that allow him to pass through a window and enter into subjects' lives and document their existence and experiences. Much of his desire to cover issues concerning immigration and other social issues come from the fabric of his family history and their migration from the former Soviet Union and how that has enabled him to work with his camera. Mark's interest in exploring reporting led him to study print journalism at the George Washington University, which then led him to receive more formal training as a photographer and video journalist at the Washington Post and Milwaukee Journal Sentinel

CHICANA traces the history of Chicana and Mexican women from pre-Columbian times to the present. It covers women's role in Aztec society, their participation in the 1810 struggle for Mexican independence, their involvement in the US labor strikes in 1872, their contributions to the 1910 Mexican revolution and their leadership in contemporary civil rights causes. Using murals, engravings and historical footage, CHICANA shows how women, despite their poverty, have become an active and vocal part of the political and work life in both Mexico and the United States.
Learn more

In an intimate portrait of migrant life along the U.S.-Mexican border, Hannah Weyer’s new film LA BODA delves into the challenges faced by a community striving to maintain their roots in Mexico, while pursuing the “American Dream” across the border. Weyer’s camera follows Elizabeth Luis during the weeks before her marriage to Artemio Guerrero, interweaving the anticipation of the upcoming wedding with candid stories that explore the architecture of the Luis family. For 22-year-old Elizabeth, migrant life has meant shouldering responsibilities beyond those of an average young adult. Along with her seven siblings, she has contributed to the family income throughout her adolescence and young adulthood, often forced to sacrifice school for fieldwork and social life for travel as she and her family move between Texas, California and Mexico. LA BODA tells the timeless story of a young woman’s coming of age, while also confronting negative stereotypes of the migrant community with the real life biography of a Mexican-American family bridging the gap between countries and culture.
Learn more

There are over 800,000 students enrolled in migrant education programs in the United States and, of those, only 45-50% ever finish high school. ESCUELA, the sequel to Hannah Weyer’s critically acclaimed documentary LA BODA, personalizes these glaring statistics through the honest portrait of a teenage Mexican-American farm worker, Liliana Luis. ESCUELA is a clear-eyed view into the lives of contemporary Mexican American migrants and their struggles to educate their children while obtaining employment. Centered around the life of Liliana, a daughter entering her first year of high school, Hannah Weyer follows the back-and-forth movement of the family between their home in Texas near the borderlands and the California agricultural fields. Despite the best efforts of the school systems to accommodate students like Liliana, the social and emotional life of this young woman is constantly in flux. This is an important work revealing the difficulties of girl life on the border in a way that no textbook could. - Joe Austin, Popular Culture Studies, Bowling Green University
Learn more

A CRUSHING LOVE, Sylvia Morales’ sequel to her groundbreaking history of Chicana women, CHICANA (1979), honors the achievements of five activist Latinas—labor organizer/farm worker leader Dolores Huerta, author/educator Elizabeth “Betita” Martinez, writer/playwright/educator Cherrie Moraga, civil rights advocate Alicia Escalante, and historian/writer Martha Cotera - and considers how these single mothers managed to be parents and effect broad-based social change at the same time. Questions about reconciling competing demands are ones that highly acclaimed filmmaker Sylvia Morales, a working mother of two herself, pondered aloud as she prepared this documentary. Historical footage and recent interviews with each woman reveal their contributions to key struggles for Latino empowerment and other major movements of our time. Both they and their grown children thoughtfully explore the challenges, adaptations, rewards, and missteps involved in juggling dual roles. Scenes of Morales at work and at home, often humorously overlaid with her teenage daughter’s commentary, bring the dilemma up to date. Chicana continues to be used in classrooms more than thirty years after it was made; A CRUSHING LOVE is a memorable sequel which offers us indelible portraits of unforgettable women, including one of Morales herself.
Learn more

MARIA IN NOBODY'S LAND is an unprecedented and intimate look at the illegal and extremely dangerous journey of three Salvadoran women to the US.
Learn more

Don't Tell Anyone (No Le Digas a Nadie)

Since the age of 4, Angy Rivera has lived in the United States with a secret that threatens to upend her life: She is undocumented. Angy arrived with her mother, fleeing violence, poverty, and civil war in their native Colombia. For 20 years they live in the shadows, struggling to stay afloat financially and avoid deportation while battling a complex and inequitable immigration system. "Don’t tell anyone" is a phrase whispered often and branded deeply on the consciousness of all who are undocumented. Now 24, unable to pay tuition for college and facing an uncertain future, Angy joins the youth-led New York State Youth Leadership Council (YLC) with whom she dons a bullhorn at pro-immigration rallies, telling all who will listen that she is "undocumented and proud." Rivera becomes an activist for undocumented youth with a popular advice blog "Ask Angy" and a YouTube channel boasting more than 27,000 views. She steps out of the shadows a second time to share her story of sexual abuse, an experience all too common among undocumented women. DON’T TELL ANYONE (NO LE DIGAS A NADIE) follows Rivera’s remarkable journey from poverty in rural Colombia to the front page of The New York Times
Learn more

Birth on the Border

Seeking a safer future for their children, two women from Ciudad Juárez, risk harassment at the hands of Border Patrol to cross the US-Mexico border legally to give birth in El Paso, Texas.
Learn more
Shopping Cart