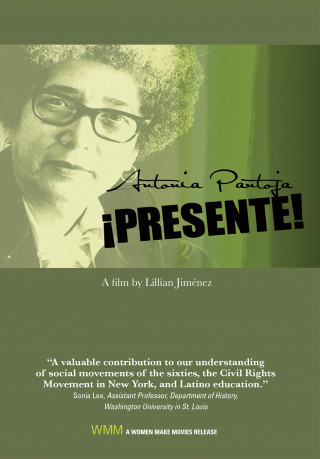 A film by Lillian Jiménez

Antonia Pantoja (1922-2002), visionary Puerto Rican educator, activist, and early proponent of bilingual education, inspired multiple generations of young people and fought for many of the rights that people take for granted today. Unbowed by obstacles she encountered as a black, Puerto Rican woman, she founded ASPIRA to empower Puerto Rican youth, and created other enduring leadership and advocacy organizations in New York and California, across the United States, and in Puerto Rico. Recognized for her achievements in 1996, Dr. Pantoja was awarded the prestigious Presidential Medal of Freedom, the highest honor bestowed upon civilians in the US.

In this important documentary, Pantoja’s compelling story is told through never-before-seen home movies, archival footage, and personal passionate testimony from Pantoja herself and some of her countless protégés, as well as her life partner. Highlighting major landmarks in Pantoja’s biography and long, productive career, the film shows her profound commitment to transforming society, her pivotal role in the Puerto Rican community’s fight to combat racism and discrimination, and her pioneering work in securing a bilingual voice in the US. An eloquent tribute to a remarkable woman, the film sheds new light on the Puerto Rican community’s far-reaching triumphs.

“Exquisitely well crafted…Pantoja [is] fully present through this documentary—her strength, her vision, her charisma and passion.”

“Inspirational! An extremely useful documentary, not only for Puerto Rican scholars and activists, but also for anybody concerned with understanding social-justice struggles by culturally oppressed populations in the US.”

“A valuable contribution to our understanding of social movements of the sixties, the Civil Rights Movement in New York, and Latino education.”

“Exhibits a warmth and intelligence that leaves the viewer inspired and ever more committed to the struggle for the empowerment and progress of our communities.”

"Recommended...Educators can welcome this documentary for both its demonstration of the importance of education for social advancement, as well as its presentation of the challenges non-English speaking Americans face in society."

For over thirty years, Ms. Jiménez worked in media literacy, arts administration, film and video funding, and media education. During the AIDS pandemic, Ms. Jiménez worked for ten years in the "Seeing Through AIDS" project under contract to the New York City Department of Health teaching health care workers how to incorporate independent media into their AIDS education, counseling and prevention work. In that time, Ms. Jimenez trained thousands of health care workers at the Health and Hospitals Corporation system and community based organizations throughout the four boroughs of New York City. For over ten years, she served as the Chair of the NCIPBP which sat the ITVS board and she also served on the Advisory Committee to the PBS Board of Directors. She was a founding chair of the National Association of Latino Independent Producers. She has made short and longer form documentaries.

For six years, Ms. Jiménez worked at Hudson Health Plan (now MVP Health Plan), first in the Clinical Department undertaking academic detailing on Pediatric Obesity throughout the Hudson Valley and then she was promoted to Sr. Director for Outreach and Community Relations. (07/19)

A CRUSHING LOVE, Sylvia Morales’ sequel to her groundbreaking history of Chicana women, CHICANA (1979), honors the achievements of five activist Latinas—labor organizer/farm worker leader Dolores Huerta, author/educator Elizabeth “Betita” Martinez, writer/playwright/educator Cherrie Moraga, civil rights advocate Alicia Escalante, and historian/writer Martha Cotera - and considers how these single mothers managed to be parents and effect broad-based social change at the same time. Questions about reconciling competing demands are ones that highly acclaimed filmmaker Sylvia Morales, a working mother of two herself, pondered aloud as she prepared this documentary. Historical footage and recent interviews with each woman reveal their contributions to key struggles for Latino empowerment and other major movements of our time. Both they and their grown children thoughtfully explore the challenges, adaptations, rewards, and missteps involved in juggling dual roles. Scenes of Morales at work and at home, often humorously overlaid with her teenage daughter’s commentary, bring the dilemma up to date. Chicana continues to be used in classrooms more than thirty years after it was made; A CRUSHING LOVE is a memorable sequel which offers us indelible portraits of unforgettable women, including one of Morales herself.
Learn more

Renowned organizer and activist Heather Booth began her remarkable career at the height of the Civil Rights movement. Through her life and work, this inspiring film explores many of the pivotal moments in progressive movements that altered our history over the last fifty years, from her involvement with Fannie Lou Hamer and the Freedom Summer Project, to her founding of the JANE Underground in 1964, to her personal relationships with respected leaders such as Julian Bond and Senator Elizabeth Warren. Featuring interviews from close friends, clients, political colleagues and current Midwest Academy students, HEATHER BOOTH: CHANGING THE WORLD explores Heather’s legacy in progressive politics and organizing. At a time when many are wondering how to make their voices heard, when civil and women's rights are under attack, Lilly Rivlin’s acclaimed documentary is an empowering look at how social change happens.
Learn more

COUNCILWOMAN follows the first term of Rhode Island Councilwoman Carmen Castillo as she balances her day job as a hotel housekeeper with the demands of public office.
Learn more

MAESTRA (2012) MAESTRAS VOLUNTARIAS (2021) Two films tell the courageous history of the first Volunteer Teachers in Cuba and the women who laid the groundwork for a massive National Literacy Campaign that would teach more than 707,000 Cubans how to read and write.
Learn more

LIVING THINKERS: AN AUTOBIOGRAPHY OF BLACK WOMEN IN THE IVORY TOWER examines the intersection of race, class and gender for Black women professors and administrators working in U.S. colleges and universities today. Through their diverse narratives, from girlhood to the present, Black women from different disciplines share experiences that have shaped them, including segregated schooling as children, and the trials, disappointments and triumphs encountered in Academia. Though more than 100 years have passed since the doors to higher education opened for Black women, their numbers as faculty members are woefully low and for many still, the image of Black women as intellectuals is incomprehensible. And while overtly expressed racism, sexism and discrimination have declined, their presence is often still often unacknowledged. Through frank and sometimes humorous conversations, this documentary interrogates notions of education for girls and women and the stereotypes and traditions that affect the status of Black women both in and out of the Academy. A perfect companion film for any classroom discussion on the intersection of racism, sexism and/or feminism.
Learn more
Shopping Cart