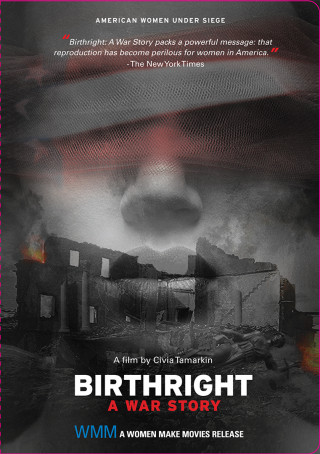 A film by Civia Tamarkin

BIRTHRIGHT: A WAR STORY is the real-life "Handmaid’s Tale." This urgent documentary examines how women are being jailed, physically violated and even put at risk of dying as a radical movement tightens its grip across America. The film tells the story of women who have become collateral damage in the aggressive campaign to take control of reproductive health care and to allow states, courts and religious doctrine to govern whether, when and how women will bear children. BIRTHRIGHT: A WAR STORY explores the accelerating gains of the crusade to control pregnant women and the fallout that is creating a public health crisis, turning pregnant women into criminals and challenging the constitutional protections of every woman in America.

"Birthright: A War Story packs a powerful message: that reproduction has become perilous for women in America."

"...a compelling documentary that is a must-see."

"BIRTHRIGHT shows Big Brother in action, and at his most misogynistic."

"To anyone who has watched “The Handmaid’s Tale”...and says it couldn’t happen today, the documentary “Birthright: A War Story” is a strong counterargument."

"Tamarkin's film is a must see for all; these issues should be spoken about and understood to further encourage a movement towards safe, unstigmatized women’s health care and protection in the United States and the world."

Civia Tamarkin is an award-winning investigative journalist, documentary filmmaker and former television news executive. She has produced independent and cable documentaries as well as developed programming content, models and strategies for cable, internet and digital global platforms. Tamarkin formerly was a CNN executive and Executive Producer of CNN’s Emmy Award weekly news magazine show "CNN & Time." She produced investigative segments and series for ABC World News Tonight, half-hour specials for Nightline and contributed to ABC’s coverage of major news stories. Her investigative reporting led to one of the first exculpatory DNA exonerations in America as well as the exoneration of a death row inmate. She has contributed to numerous magazines and newspapers and reported stories in Central America, Africa, India and Southeast Asia, including the fall of Vietnam and its aftermath. Tamarkin has received a National News and Documentary Emmy, National Emmy nominations, National Headliner Awards, an Edward R. Murrow Award, and awards from The Society of Professional Journalists, the Overseas Press Club of America and the Chicago Headline Club. (6/17)

In this BAFTA award-winning film, two-time Emmy and Peabody award-winning filmmaker Deeyah Khan examines the erosion of reproductive rights in the United States, foregrounding the stories of those often forgotten in this ‘war’ who nonetheless find themselves on its frontline: impoverished women and women of color.
Learn more

A grave warning of how far state control of women’s bodies can go, FLY SO FAR follows Teodora Vásquez, who was sentenced to thirty years in a Salvadorean prison after she suffered a stillbirth.
Learn more

Belly of the Beast

Underneath the din of politicians posturing about "life" and "choice" and beyond the shouted slogans about murder and rights, there are real stories of real women who have had abortions. Each year in the US, 1.3 million abortions occur, but the topic is still so stigmatized it’s never discussed in polite company. Powerful, poignant, and fiercely honest, I HAD AN ABORTION tackles this taboo, featuring 10 women – including famed feminist Gloria Steinem – who candidly describe experiences spanning seven decades, from the years before Roe v. Wade to the present day. Filmmakers Jennifer Baumgardner (author of Manifesta: Young Women, Feminism, and the Future) and Gillian Aldrich insightfully document how changing societal pressures have affected women’s choices and experiences. Cutting across age, race, class and religion, the film unfolds personal narratives with intimate interviews, archival footage, family photos and home movies. Arranged chronologically, the stories begin with Florence Rice, now 86, telling without regret about her abortion in the 1930s. Other women speaking out include Marion Banzhaf, who, inspired by both the Miss America protests and the Stonewall rebellion, fundraised on her campus to pay for her abortion, and Robin Ringleka-Kottke, who found herself pregnant as an 18-year-old pro-life Catholic. With heartfelt stories that are never sentimentalized, I HAD AN ABORTION personalizes what has become a vicious and abstract debate.
Learn more

South Dakota is America’s heartland—waving cornfields, hard-working farmers, family values and a population of 750,000, the majority of whom identify as conservative and anti-abortion. Native daughter Rebecca Lee returns home in 2006 on the brink of a historic state vote: House Bill 1215 could make South Dakota the first state to outlaw most abortions since Roe vs. Wade passed almost 30 years earlier. In The Middle of Everywhere, Lee discovers the debate to be complex, with both sides claiming compassion for women and the same desire to stop the need for abortion. When 1215 fails to pass, Lee sets out to uncover what would make a self-proclaimed pro-life state vote against the very measure that would end most legal abortions. South Dakotans appear conflicted in their beliefs: passing the Pharmacist Refusal Law, allowing pharmacists and doctors the right not to dispense birth control if doing so goes against their religious views, yet voting along pro-choice lines to keep abortion safe and legal. Was the vote a simple misunderstanding of what it means to be pro-choice? Was it a deeply-held resentment against government intrusion into people’s private lives? Whatever the final reason, The Middle of Everywhere reveals that the issue goes beyond the simple choices of being for or against abortion to the much deeper question of what values we hold dear as Americans and as humans beings.
Learn more

62 DAYS is an urgent examination of a growing trend of laws that seek to control a pregnant woman's body.
Learn more
Shopping Cart