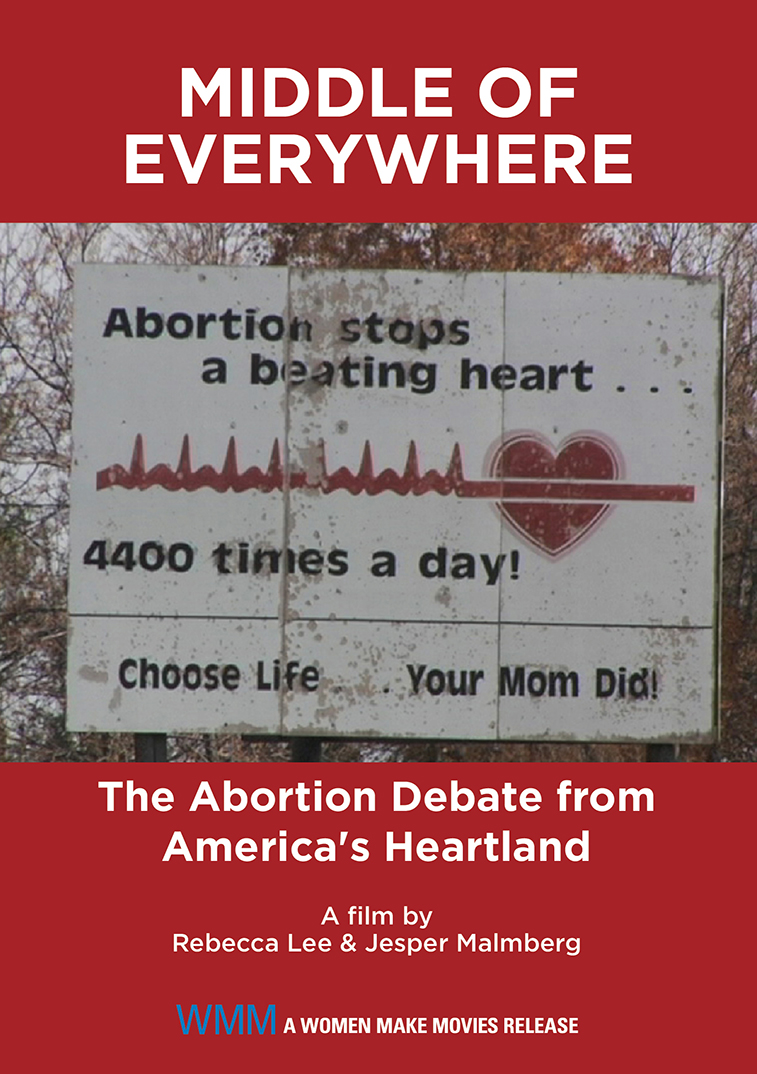 WATCH CLIP: DISCUSSING BOTH SIDES OF THE ABORTION DEBATE

The Abortion Debate from America's Heartland

South Dakota is America’s heartland—waving cornfields, hard-working farmers, family values and a population of 750,000, the majority of whom identify as conservative and anti-abortion. Native daughter Rebecca Lee returns home in 2006 on the brink of a historic state vote: House Bill 1215 could make South Dakota the first state to outlaw most abortions since Roe vs. Wade passed almost 30 years earlier. In The Middle of Everywhere, Lee discovers the debate to be complex, with both sides claiming compassion for women and the same desire to stop the need for abortion.

When 1215 fails to pass, Lee sets out to uncover what would make a self-proclaimed pro-life state vote against the very measure that would end most legal abortions. South Dakotans appear conflicted in their beliefs: passing the Pharmacist Refusal Law, allowing pharmacists and doctors the right not to dispense birth control if doing so goes against their religious views, yet voting along pro-choice lines to keep abortion safe and legal. Was the vote a simple misunderstanding of what it means to be pro-choice? Was it a deeply-held resentment against government intrusion into people’s private lives? Whatever the final reason, The Middle of Everywhere reveals that the issue goes beyond the simple choices of being for or against abortion to the much deeper question of what values we hold dear as Americans and as humans beings.

“Essential to learn[ing] more about the multiple layers of the abortion debate in the US…this film challenges multiple stereotypes by revealing not that they are false, but rather that they are all too real and much more complicated than we typically acknowledge.”

“Captures the essence of middle America and its ambivalence on the controversy of abortion and abortion politics…Themes of freedom, independence, and fundamentalism around the issue of abortion are explored and exposed with an objective eye.”

"Recommended...will be of particular interest to educational institutions and public libraries."

“***...An intriguing exploration of a perennial topic, this is recommended.”

Rebecca Lee went to film school in London, England, where she obtained a Masters in Filmmaking and met lots of people from different places. It was only after she got that degree and made her first film, THE MIDDLE OF EVERYWHERE, that she realized that film was not her only interest. After traveling and working on independent film productions in various roles (sound recording, art department, editorial department), she kept finding a common thread among the people she was spending time with: lots of good ideas and good energy, but nobody to coordinate them and bring them to life. Touché. (2/10)

This fascinating political look at a little-known chapter in women's history tells the story of "Jane", the Chicago-based women's health group who performed nearly 12,000 safe illegal abortions between 1969 and 1973 with no formal medical training.
Learn more

Underneath the din of politicians posturing about "life" and "choice" and beyond the shouted slogans about murder and rights, there are real stories of real women who have had abortions. Each year in the US, 1.3 million abortions occur, but the topic is still so stigmatized it’s never discussed in polite company. Powerful, poignant, and fiercely honest, I HAD AN ABORTION tackles this taboo, featuring 10 women – including famed feminist Gloria Steinem – who candidly describe experiences spanning seven decades, from the years before Roe v. Wade to the present day. Filmmakers Jennifer Baumgardner (author of Manifesta: Young Women, Feminism, and the Future) and Gillian Aldrich insightfully document how changing societal pressures have affected women’s choices and experiences. Cutting across age, race, class and religion, the film unfolds personal narratives with intimate interviews, archival footage, family photos and home movies. Arranged chronologically, the stories begin with Florence Rice, now 86, telling without regret about her abortion in the 1930s. Other women speaking out include Marion Banzhaf, who, inspired by both the Miss America protests and the Stonewall rebellion, fundraised on her campus to pay for her abortion, and Robin Ringleka-Kottke, who found herself pregnant as an 18-year-old pro-life Catholic. With heartfelt stories that are never sentimentalized, I HAD AN ABORTION personalizes what has become a vicious and abstract debate.
Learn more

In San Antonio, Lisa and Brian Switzer risk their savings with a Medical Tourism company promising them an affordable solution after seven years of infertility. Halfway around the world in Mumbai, 27-year-old Aasia Khan, mother of three, contracts with a fertility clinic to be implanted with the Texas couple’s embryos. MADE IN INDIA, about real people involved in international surrogacy, follows the Switzers and Aasia through every stage of the process. With its dual focus, this emotionally charged, thoroughly absorbing film charts obstacles faced by the Switzers and presents intimate insights into Aasia’s circumstances and motivation. As their stories become increasingly intertwined, the bigger picture behind offshore outsourcing of pregnancies—a booming, unregulated reproductive industry valued at $450 million in India alone—begins to emerge. So do revealing questions about international surrogacy’s legal and ethical implications, global corporate practices, human and reproductive rights, and commodification of the body.
Learn more

62 DAYS is an urgent examination of a growing trend of laws that seek to control a pregnant woman's body.
Learn more
Shopping Cart