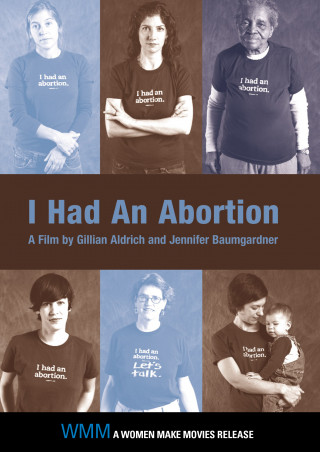 A film by Gillian Aldrich and Jennifer Baumgardner

Underneath the din of politicians posturing about "life" and "choice" and beyond the shouted slogans about murder and rights, there are real stories of real women who have had abortions. Each year in the US, 1.3 million abortions occur, but the topic is still so stigmatized it’s never discussed in polite company. Powerful, poignant, and fiercely honest, I HAD AN ABORTION tackles this taboo, featuring 10 women – including famed feminist Gloria Steinem – who candidly describe experiences spanning seven decades, from the years before Roe v. Wade to the present day. Filmmakers Jennifer Baumgardner (author of Manifesta: Young Women, Feminism, and the Future) and Gillian Aldrich insightfully document how changing societal pressures have affected women’s choices and experiences.

Cutting across age, race, class and religion, the film unfolds personal narratives with intimate interviews, archival footage, family photos and home movies. Arranged chronologically, the stories begin with Florence Rice, now 86, telling without regret about her abortion in the 1930s. Other women speaking out include Marion Banzhaf, who, inspired by both the Miss America protests and the Stonewall rebellion, fundraised on her campus to pay for her abortion, and Robin Ringleka-Kottke, who found herself pregnant as an 18-year-old pro-life Catholic. With heartfelt stories that are never sentimentalized, I HAD AN ABORTION personalizes what has become a vicious and abstract debate.

“Fresh, moving, important…Muriel Rukeyser wrote, ‘If one woman told the truth about her life, the world would split open.’ [This film] gives us 10 truth-telling women, and splits the world open in as many ways.”

“A breakthrough in the contemporary discussion about abortion … succeed(s) in showing how differently abortion has been understood — and felt! — in different times. This destabilizes all the other discussions, such as Lake of Fire, which uncritically assume that the current political climate of doom, sorrow and defensiveness is the natural tone for any discussion of [abortion]."

“Moving, intense, and refreshingly honest, the film is a terrific educational tool.”

"Provides essential context for examining issues of reproductive justice while serving 'to break the wall of silence' on this subject."

“In a very short space of time SPEAK OUT: I HAD AN ABORTION manages to transform the secrecy and stigma of abortion to a rally cry for speaking up about the commonality and the complexity of abortion decisions.”

“Showing I HAD AN ABORTION in my Women’s Studies class led to a great discussion on feminist activism and women's bodies, from general health to specific issues like abortion, rape, abuse, etc., and the value of speaking out in order to create change.”

"No one who sees this remarkable film will be able to turn away and ignore their experience."

Gillian Aldrich is a documentary producer and journalist who has worked on social justice issues through television, radio, and print. She worked with Michael Moore on several projects, including for the Academy Award winning documentary BOWLING FOR COLUMBINE. She also worked on his television series, "The Awful Truth," his best-selling book, "Downsize This," and his documentary, THE BIG ONE. In television, she line-produced Trio’s "The Syringa Tree," a moving one woman show about growing up in South Africa under apartheid, and she worked on the Showtime documentary BROTHERHOOD OF HATE, profiling one family’s crime and a community steeped in white supremacist ideology. With Skylight Pictures, she co-produced BATTLE FOR BROAD, a documentary about the Kensington Welfare Rights Union, a renowned group of homeless activists in Philadelphia. From this experience, Gillian became an early member of the media college, a group of media professionals who assist The Poor Peoples’ Economic Human Rights Campaign and advocate media democracy. In radio, she produced the progressive daily national news show "Democracy Now!" and she wrote and produced 20TH CENTURY MAN for "This American Life." (01/20)

Jennifer Baumgardener is is a writer, activist, filmmaker, and lecturer whose work explores abortion, sex, bisexuality, rape, single parenthood, and women’s power. She attended Lawrence University in Appleton, Wisconsin, graduating in 1992. While at Lawrence, she helped organize an anti-war "Guerrilla Theater," led a feminist group on campus, and co-founded an alternative newspaper called The Other that focused on intersectional issues of liberation. She moved to New York City after graduation and in 1993 began working as an unpaid intern for Ms. magazine. By 1997, she had become the youngest editor at Ms.

She has since written for numerous magazines, including Glamour, The Nation, Babble, More, and Maxim. Her books include "Manifesta: Young Women, Feminism and the Future, Grassroots: A Field Guide for Feminist Activism" written with Amy Richards, and "Look Both Ways: Bisexual Politics." In 2004, she produced the documentary film I HAD AN ABORTION, which tells the story of ten women’s abortion experiences from the 1920s to the present. Baumgardner’s work has been featured on shows from The Oprah Winfrey Show to NPR's Talk of the Nation, as well as in the New York Times, BBC News Hour, Bitch, and various other venues. She has keynoted at more than 250 universities and, in 2003, the Commonwealth Club of California hailed her in their centennial year as one of six "Visionaries for the 21st Century." From 2013 to 2017, she served as the Executive Director/Publisher at The Feminist Press at the City University of New York (CUNY), a feminist institution founded by Florence Howe in 1970. (01/20)

In this BAFTA award-winning film, two-time Emmy and Peabody award-winning filmmaker Deeyah Khan examines the erosion of reproductive rights in the United States, foregrounding the stories of those often forgotten in this ‘war’ who nonetheless find themselves on its frontline: impoverished women and women of color.
Learn more

62 DAYS is an urgent examination of a growing trend of laws that seek to control a pregnant woman's body.
Learn more

A grave warning of how far state control of women’s bodies can go, FLY SO FAR follows Teodora Vásquez, who was sentenced to thirty years in a Salvadorean prison after she suffered a stillbirth.
Learn more

From 1945-73, 1.5 million unmarried young American women, facing enormous social pressures, surrendered babies to adoption. Lacking sex education and easy access to birth control, they were forced into hiding while pregnant and then into “abandoning” their infants. In her latest film, Ann Fessler, Professor of Photography at Rhode Island School of Design, reprises the subject of her award-winning The Girls Who Went Away (National Book Critics Circle; Ballard Book Prize), which Ms. readers named an all-time best feminist book. Drawing on interviews with 100 women, Fessler lets them have their say and brings hidden history to light. We hear only their voices, which detail wrenching experiences against images from vintage newsreel and educational films reinforcing stereotypes of women’s roles following WWII. This gripping documentary will help today’s students grasp what life was like before the sexual and feminist revolutions had fully dawned.
Learn more

South Dakota is America’s heartland—waving cornfields, hard-working farmers, family values and a population of 750,000, the majority of whom identify as conservative and anti-abortion. Native daughter Rebecca Lee returns home in 2006 on the brink of a historic state vote: House Bill 1215 could make South Dakota the first state to outlaw most abortions since Roe vs. Wade passed almost 30 years earlier. In The Middle of Everywhere, Lee discovers the debate to be complex, with both sides claiming compassion for women and the same desire to stop the need for abortion. When 1215 fails to pass, Lee sets out to uncover what would make a self-proclaimed pro-life state vote against the very measure that would end most legal abortions. South Dakotans appear conflicted in their beliefs: passing the Pharmacist Refusal Law, allowing pharmacists and doctors the right not to dispense birth control if doing so goes against their religious views, yet voting along pro-choice lines to keep abortion safe and legal. Was the vote a simple misunderstanding of what it means to be pro-choice? Was it a deeply-held resentment against government intrusion into people’s private lives? Whatever the final reason, The Middle of Everywhere reveals that the issue goes beyond the simple choices of being for or against abortion to the much deeper question of what values we hold dear as Americans and as humans beings.
Learn more

This fascinating political look at a little-known chapter in women's history tells the story of "Jane", the Chicago-based women's health group who performed nearly 12,000 safe illegal abortions between 1969 and 1973 with no formal medical training.
Learn more
Shopping Cart