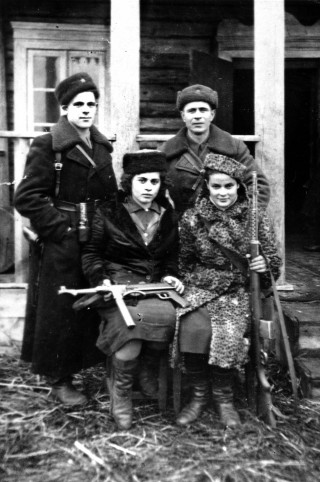 A film by Martha Goell Lubell and Barbara Attie

Why would a young person choose resistance rather than submission during Hitler's reign of terror while her world was collapsing around her? In this gripping documentary, three Jewish women answer this question by recalling their lives as teenagers in occupied Holland, Hungary and Poland, when they refused to remain passive as the Nazis rounded up local Jewish populations. Defying her family's wishes, each girl found an unexpected way of fighting back -- Barbara Rodbell, as a ballet dancer shuttling Jews to safe houses and distributing resistance newspapers; Faye Schulman, as a photographer and partisan waging guerrilla war against the Germans; and Shulamit Lack, as a leader in an underground Zionist group smuggling Jews across the border. Enriched by home movies, archival footage, and previously unpublished photographs, the women's varied and vibrant stories provide a unique look at Jewish resistance to Nazism, a subject all too often consigned to history's footnotes.

"Women's roles during the Third Reich have received little attention in monographs and films; even less work has been done on the contributions women made to resistance under Nazism. [This] film will begin to fill in information on this much neglected subject."

"A powerful example for young people, especially young women, of how to take a stand and make a difference in their lives and those of others."

"What really impressed me, in addition to the women's narratives and warm, lively manner, was the professionalism of the editing. This is such important work."

"Given the lack of focus in existing materials on what women were doing to resist, not just what women suffered under Nazi power, this video should receive wide reception and use in schools and synagogues and churches."

Barbara Attie received an M.F.A. from Temple University, where she was named to the School of Communications and Theater Hall of Fame. Her documentary about teenage girls who joined the resistance movement during the Holocaust, Daring to Resist (with Martha Lubell), was broadcast nationally on PBS and named “one of the 10 best documentaries of 2000” by The Boston Globe. Attie is former board chair of the National Clearinghouse for the Defense of Battered Women and served on the Board of Planned Parenthood Southeastern Pennsylvania.

She was associate producer for the Discovery Network's Emmy Award-winning series Teacher TV during 1992 and 1993. Lubell has produced two series of documentaries for WHYY Public Radio: Hard Times for Dreaming and When a Plant Closes. She was a researcher for CBS News and ABC News from 1970 until 1975 in New York, Paris and Japan. (09/09)

MAGGIE GROWLS is a portrait of the amazing, canny, lusty, charming and unstoppable Maggie Kuhn (1905-1995), who founded the Gray Panthers (the nation’s leading progressive senior advocacy organization) in 1970 after being forced to retire from a job she loved at the age of 65. Her outrage and determination fueled a political chain reaction that forever changed the lives of older Americans, repealing mandatory retirement laws and proving that “old” is not a dirty word. Out of what Ralph Nader called “the most significant retirement in modern American history,” Maggie created one of the most potent social movements of the century – one that was committed to justice, peace and fairness to all, regardless of age. Her defiant “panther growl” and dramatic slogan “Do something outrageous every day” launched nothing less than a contemporary cultural revolution, both in terms of redefining the meaning of age and through her insistence on “young and old together.” "Maggie Growls" looks at the forces that shaped the movement as well as its leader, using Maggie’s life as a lens through which to examine the intertwined issues of social reform and aging in America. This inspiring documentary is an important addition to courses in American Studies, History, Women’s Studies, Gerontology and Sociology. This film is a presentation of the Independent Television Service (ITVS) with funding provided by the Corporation for Public Broadcasting (CPB).
Learn more

Mrs. Goundo is fighting to remain in the United States. But it’s not just because of the ethnic conflict and drought that has plagued her native Mali. Threatened with deportation, her two-year-old daughter could be forced to undergo female genital mutilation (FGM), like 85 percent of women and girls in Mali. Using rarely cited grounds for political asylum, Goundo must convince an immigration judge that her daughter is in danger. Sensitive and moving, this important film reveals how women are profoundly affected by the legal struggles surrounding immigration. As issues of asylum, international law and human rights collide with FGM and its devastating health consequences, filmmakers Barbara Attie and Janet Goldwater travel between an FGM ceremony in a Malian village, where dozens of girls are involved, to the West African expatriate community of Philadelphia, where Mrs. Goundo challenges beliefs and battles the American legal system for her child’s future.
Learn more

Uncovering amazing stories of hope in the aftermath of the Rwandan genocide, Academy Award-Nominee GOD SLEEPS IN RWANDA captures the spirit of five courageous women as they rebuild their lives, redefine women’s roles in Rwandan society and bring hope to a wounded nation. The 1994 Rwandan Genocide left the country nearly 70 percent female, handing Rwanda’s women an extraordinary burden and an unprecedented opportunity. Girls are attending school in record numbers, and women now make up a large part of the country’s leadership. Working with two cameras and no crew except for their translator—a genocide survivor herself—the filmmakers uncover incredible stories: an HIV-positive policewoman raising four children alone and attending night school to become a lawyer, a teenager who has become head of household for her four siblings, and a young woman orphaned in her teens who is now the top development official in her area. Heart-wrenching and inspiring, this powerful film is a brutal reminder of the consequences of the Rwandan tragedy, and a tribute to the strength and spirit of those who are moving forth. ** Emmy Winner for Best Documentary and Academy Award Nominee for Best Documentary Short!**
Learn more

At only 22, Hungarian poet Hannah Senesh made the ultimate sacrifice – having already escaped Nazi-occupied Europe for Palestine and freedom, she returned, parachuting in behind enemy lines in a valiant effort to save Hungary’s Jews from deportation to Auschwitz and certain death. Captured immediately upon crossing the border into Hungary, Hannah was tortured and taken to a prison in Budapest, yet she refused to reveal the coordinates of her fellow resistance fighters - even when they also arrested her mother, Catherine. Hannah became a symbol of courage for her fellow prisoners, encouraging them to remain in good spirits, never losing faith in her Jewish identity, even as she was led out to be executed by firing squad. Narrated by Academy Award® Nominee Joan Allen, BLESSED IS THE MATCH is a truly moving memorial that brings to life this Holocaust heroine through interviews with Holocaust historians, eyewitness accounts from those on the rescue operation as well as in the prison, rare family photographs and the writings of Hannah and her mother. The film recreates Hannah’s perilous and heartbreaking mission, reconstructs her defiant months in the Gestapo prison and – through Hannah’s diary entries and poetry – looks back on the life of a talented and complex girl who came of age in a world descending into madness.
Learn more
Shopping Cart