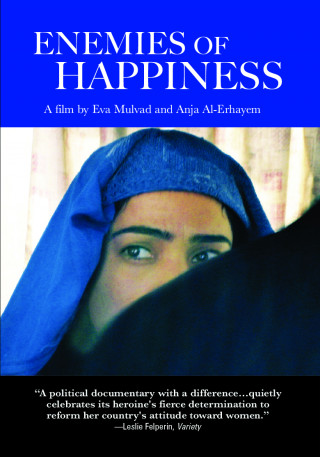 A film by Eva Mulvad and Anja Al-Erhayem

"In September 2005, Afghanistan held its first parliamentary elections in 35 years. Among the candidates for 249 assembly seats was Malalai Joya, a courageous, controversial 27-year-old woman who had ignited outrage among hard-liners when she spoke out against corrupt warlords at the Grand Council of tribal elders in 2003. ENEMIES OF HAPPINESS is a revelatory portrait of this extraordinary freedom fighter and the way she won the hearts of voters, as well as a snapshot of life and politics in war-torn Afghanistan.

Amidst vivid, poetic images of Joya's dusty Farah Province, the film tracks the final weeks of her campaign, when death threats restrict her movements. But the parade of trusting constituents arriving on her doorstep leaves no doubt that Joya is a popular hero. Among her visitors is a 100-year-old woman who treks two hours to offer loyalty and herbal medicine. King Solomon-style, Joya acts as folk mediator and advocate, adjudicating between a wife and her violent, drug-addicted husband and counseling a family forced to marry off their adolescent daughter to a much older man. Protected by armed guards, Joya heads to poor rural areas to address crowds of women, pledging to be their voice and ‘expose the enemies of peace, women, and democracy.’ In the presence of her fierce tenacity, we can imagine the future of an enlightened nation.” - Caroline Libresco, Sundance Film Festival

“A political documentary with a difference…quietly celebrates its heroine's fierce determination to reform her country's attitude toward women.”

“A powerful portrait…offers compelling evidence that it takes more than military might and diplomats to hold democratic elections in a country where few people know how to read or write and many say votes can be bought and sold.”

“Eloquent...Joya is a controversial voice for a nation ruined by war and ruled by tradition, and a voice with a desperate urge for change.”

“Carries the magic uplift of classic Hollywood and the considerable bonus of authenticity.”

“Incredible…a character so compelling you don't want the camera to turn away.”

“3 Stars. Recommended. Capture[s] Joya’s spirit and tenacity, while also showing the considerable obstacles that Afghan women continue to face… offers a much-needed reminder of what is taking place in that still-troubled country.”

“Watching this politician interact with her constituents is a lesson in basic democracy, human rights and feminism.”

In 2011 Eva Mulvad (born 1972) won the prestigious, Danish Roos Award granted for her entire body of work. Mulvad graduated from the Danish Film School in 2001 and by 2006 she had her international break-through with ENEMIES OF HAPPINESS, which focused on the female politician Malalai Joya’s political campaign ahead of the first democratic elections in Afghanistan 2005. The film won the Silver Wolf Award at IDFA and subsequently the World Cinema Jury Prize at the Sundance Film Festival.

With her intrinsic flair for drama and with many international awards in the baggage, Eva Mulvad is one of the most prominent Danish film-makers. Most recently Mulvad spent three years working on family-chronicle entitled THE GOOD LIFE (2010). The film was shown at IDFA and went on to win the award for Best Documentary at Kalovy Vary International Film Festival. (8/14)

Anja Al Erhayem is a Danish filmmaker with an Iraqi father and a Danish mother. Before the US-led invasion of Iraq, in 2002, Anja travelled to Iraq with her father to make a film about his family. The film, titled BACK TO BAGHDAD, showed unique footage of everyday life in Iraq under Saddam Hussein. The film itself has won a number of international prizes and after the war started, Anja went back to make a follow-up film, Dangerous Freedom, about life just after Hussein. In 2006, Al Erhayam directed and hosted six documentary and travel shows in the Middle East. She also co-directed ENEMIES OF HAPPINESS (2006). She is also the author of "The Sun Cries Over Baghdad."

The story of a young Afghan woman’s brave fight for justice after experiencing years of abuse at the hands of her father.
Learn more

A coming of age story in the wake of the Arab Spring, NADA’S REVOLUTION is an intimate portrait of a young, post-revolution Egyptian woman fighting for her freedom and independence in a society caught between old traditions and modernization. Amidst the political turmoil that has paralyzed Egypt for almost three years, we follow Nada’s struggle to establish herself as an independent woman and theater professional as she sets out to make her old dream come true: to work with children’s theater. When the revolution broke out in 2011, Nada–like many other young women–was full of energy and hope. But in the aftermath of the revolution and when the election of President Morsi further pushes the country into political turmoil, the situation appears hopeless. Nada is confronted with the question of how to stay true to her own dreams, while conservative ideas about gender roles and women’s freedom are hard to change. Nada’s fight is not over.
Learn more

SEARCH FOR FREEDOM traces the dramatic social and political history of Afghanistan from the 1920s to the present through the stories of four remarkable women: Princess Shafiqa Saroj, sister of the beloved progressive King Amanullah (1919-1929); Mairman Parveen, the first woman to sing on Afghan radio; Moshina, a war widow and survivor of a Taliban massacre; and Sohaila, an exiled medical student who ran underground schools for RAWA (Revolutionary Association of Afghan Women) during the Taliban regime. Through their personal stories, a surprising portrait of Afghanistan’s history emerges. Stunning archival footage from the early 20th century captures a time of remarkable progress and freedom for women that belies most Western perceptions. Other historical footage and Jahnagir’s incisive commentary reveal women’s realities and resilience under near constant occupation, first with the Soviet invasion, then under the mujahadeen and more recently under the repressive Taliban. Defying and clarifying the image of Afghan women as mere victims, SEARCH FOR FREEDOM offers a nuanced portrait of women who find choices where none are offered, who continue to find hope in the face of exile and isolation.
Learn more
Shopping Cart