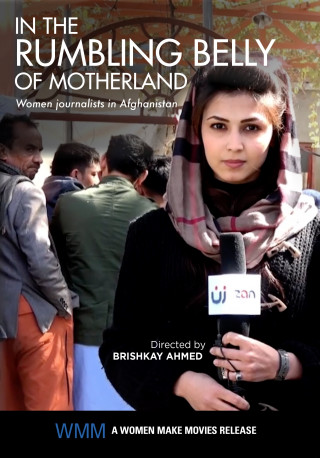 Filmed as the U.S. planned for its September 2021 withdrawal of troops, IN THE RUMBLING BELLY OF MOTHERLAND documents an inspiring female-led news agency in Kabul, Afghanistan.

As the U.S. planned to withdraw troops from Afghanistan in September 2021, Canadian-Afghan filmmaker and journalist Brishkay Ahmed was filming IN THE RUMBLING BELLY OF MOTHERLAND. Revealing the ongoing dangers for women reporters, and the extraordinary risks they take, this brave film provides an in-depth look into Zan TV, Kabul’s female-led news agency. A professional journalist herself, Ahmed documents both the harrowing and inspiring work of young, female journalists over the course of the two-year lead up to the Taliban takeover of Afghanistan. Following parallel news stories as they unfold – two sets of national elections as well as ongoing U.S.-Taliban peace talks – the film reveals the daily hurdles Afghan female reporters and media staff face, underscoring the existential current events that threaten both Zan TV as a media outlet and the livelihoods of the women at its heart. Ultimately, IN THE RUMBLING BELLY OF MOTHERLAND  serves as a prescient reminder that journalism matters and that we can never take women's rights for granted.

“This film should be of special interest.”

“Illustrates journalism at its finest, and most harrowing.”

"The film should evoke empathy in the view and also stoke a sense of responsibility that might bloom into advocacy."

"Women's voices and independent journalism have never been more in peril or, as IN THE RUMBLING BELLY OF MOTHERLAND reminds, more important."

With the participation of the Government of Canada

SEARCH FOR FREEDOM traces the dramatic social and political history of Afghanistan from the 1920s to the present through the stories of four remarkable women: Princess Shafiqa Saroj, sister of the beloved progressive King Amanullah (1919-1929); Mairman Parveen, the first woman to sing on Afghan radio; Moshina, a war widow and survivor of a Taliban massacre; and Sohaila, an exiled medical student who ran underground schools for RAWA (Revolutionary Association of Afghan Women) during the Taliban regime. Through their personal stories, a surprising portrait of Afghanistan’s history emerges. Stunning archival footage from the early 20th century captures a time of remarkable progress and freedom for women that belies most Western perceptions. Other historical footage and Jahnagir’s incisive commentary reveal women’s realities and resilience under near constant occupation, first with the Soviet invasion, then under the mujahadeen and more recently under the repressive Taliban. Defying and clarifying the image of Afghan women as mere victims, SEARCH FOR FREEDOM offers a nuanced portrait of women who find choices where none are offered, who continue to find hope in the face of exile and isolation.
Learn more

"In September 2005, Afghanistan held its first parliamentary elections in 35 years. Among the candidates for 249 assembly seats was Malalai Joya, a courageous, controversial 27-year-old woman who had ignited outrage among hard-liners when she spoke out against corrupt warlords at the Grand Council of tribal elders in 2003. ENEMIES OF HAPPINESS is a revelatory portrait of this extraordinary freedom fighter and the way she won the hearts of voters, as well as a snapshot of life and politics in war-torn Afghanistan. Amidst vivid, poetic images of Joya's dusty Farah Province, the film tracks the final weeks of her campaign, when death threats restrict her movements. But the parade of trusting constituents arriving on her doorstep leaves no doubt that Joya is a popular hero. Among her visitors is a 100-year-old woman who treks two hours to offer loyalty and herbal medicine. King Solomon-style, Joya acts as folk mediator and advocate, adjudicating between a wife and her violent, drug-addicted husband and counseling a family forced to marry off their adolescent daughter to a much older man. Protected by armed guards, Joya heads to poor rural areas to address crowds of women, pledging to be their voice and ‘expose the enemies of peace, women, and democracy.’ In the presence of her fierce tenacity, we can imagine the future of an enlightened nation.” - Caroline Libresco, Sundance Film Festival
Learn more

Two-time Sundance Film Festival award winner SONITA tells the inspiring story of Sonita Alizadeh, an 18-year-old Afghan refugee in Iran, who thinks of Michael Jackson and Rihanna as her spiritual parents and dreams of becoming a big-name rapper. For the time being, her only fans are the other teenage girls in a Tehran shelter. And her family has a very different future planned for her: as a bride she's worth $9,000. Iranian director Rokhsareh Ghaem Maghami (GOING UP THE STAIRS) poignantly shifts from observer to participant altering expectations, as Sonita's story unfolds in this personal and joyful portrait. An intimate portrait of creativity and womanhood, SONITA highlights the rarely seen intricacies and shifting contrasts of Iranian society through the lens of an artist who is defining the next generation.
Learn more

The Tunisian Revolution sparked the Arab Spring. But revolution was the easy part—as two women learned on the journey from protest to functioning government. Emna Ben Jemaa and Jawhara Ettis represent opposite sides of their country’s politics: One is a well-known journalist in the city, fighting for free speech. The other is a strict Islamist from a rural town, elected to help draft the new constitution. Despite their differences, both face the threat of extremists hijacking their fragile political process, and both Emna and Jawhara have to make difficult choices to balance their public political roles with their domestic environment. The film is a gripping and surprising perspective on the clash between Islam and secularism, and the political role of women in the Arab world. Offering an insightful portrait of the messy work of democracy, A REVOLUTION IN FOUR SEASONS is especially poignant in this global era of divided politics.
Learn more
Shopping Cart