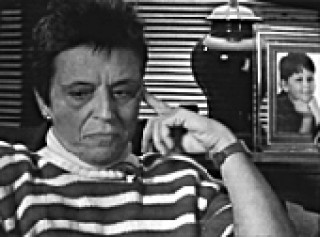 A Spiritual Journey with AIDS

A film by Mona Smith

Carole Lafavor (Ojibwe), activist, mother and registered nurse, is a person with AIDS. In this candid and moving portrait, Lafavor relates how she has come to terms with AIDS by combining her traditional beliefs and healing practices with western medicine. HER GIVEAWAY is more than just basic information—it is an inspiring example of how we can all learn from the Native American philosophy of illness. Produced by Smith (Dakota) for the Minnesota American Indian AIDS Task Force, this film confronts the “official” invisibility of women, Native Americans and lesbians with AIDS.

"This frank, open, intimate portrait presents basic facts while dispelling many of the myths surrounding AIDS."

Honored by the Moon

In this upbeat and empowering film, Native American lesbians and gay men speak of their unique historical and spiritual role. Within the Native American community, homosexuality was traditionally associated with the power to bridge worlds. Interviews with leading activists and personal testimony attest to the positive and painful experiences of being Native and gay. Produced by Smith (Dakota) for the Minnesota American Indian AIDS Task Force to raise issues of homophobia within the Indian community, this ground-breaking documentary is also an important contribution to culturally sensitive discussions of homosexuality.
Learn more
Shopping Cart