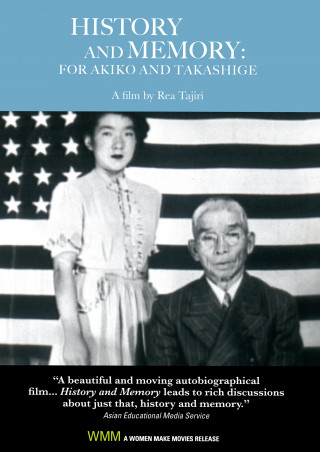 History and Memory: For Akiko and Takashige

A film by Rea Tajiri

Groundbreaking and haunting, this film is a poetic composition of recorded history and non-recorded memory. Filmmaker Rea Tajiri’s family was among the 120,000 Japanese and Japanese Americans who were imprisoned in internment camps after the attack on Pearl Harbor. And like so many who were in the camps, Tajiri’s family wrapped their memories of that experience in a shroud of silence and forgetting.

Ruminating on the difficult nature of representing the past – especially a past that exists outside traditional historic accounts – Tajiri blends interviews, memorabilia, a pilgrimage to the camp where her mother was interned, and the story of her father, who had been drafted pre-Pearl Harbor and returned to find his family’s house removed from its site.
Throughout, she surveys the impact of images (real images, desired images made real, and unrealized dream images). The film draws from a variety of sources: Hollywood spectacle, government propaganda, newsreels, memories of the living, and sprits of the dead, as well as Tajiri’s own intuitions of a place she has never visited, but of which she has a memory. More than simply calling attention to the gaps in the story of the Japanese American internment, this important film raises questions about collective history – questions that prompt Tajiri to daringly re-imagine and re-create what has been stolen and what has been lost.

“Tajiri approaches her subject like a poet. She weaves together images and allows them to enrich one another in skewed and subtle ways as their resonances slowly emerge.”

“A dense work of found and reconstructed images, a cathartic reworking again and again of history.”

“Tajiri's film ultimately becomes a visual memorial of internment that refuses to consolidate cultural trauma into a coherent historical narrative but that instead bears witness to the trauma of exclusive citizenship and national identity.”

“Argues powerfully for no less than new ways of knowing and remembering.”

“Much documentary work has concentrated on getting the story straight…HISTORY AND MEMORY attempts to see how distortion and story combine to share our recollections.”

“A beautiful and moving autobiographical film…HISTORY AND MEMORY leads to rich discussions about just that, history and memory.”

“One of the highest artistic achievements in any medium ever made by an Asian American.”

REA TAJIRI is a filmmaker and visual artist who was born in Chicago, Illinois. She earned her BFA and MFA degree from the California Institute of the Arts in post-studio art. Her ground-breaking, award-winning film, digital video and installation work, has been supported by numerous grants, fellowships and artistic residencies, has been exhibited widely in museums, on television and in international film festivals.

Poetic, subtly layered and politically engaged, her work advances the exploration of forgotten histories, multi-generational memory, landscape and the Japanese American experience. Her experimental documentary History and Memory; for Akiko; Takashige, and feature film Strawberry Fields have influenced a generation of filmmakers, leading to their inclusion in Asian American, Cinema Studies, Women’s and Gender Studies curricula in the US.

Her recent multi-site installation project Wataridori-birds of Passage (2018) in Philadelphia mapped and enlivened forgotten traces of local Japanese American history linked in a series of locations around the city. Her feature documentary Lordville (2014) probed the
material and immaterial traces of an upstate New York town’s history. Her current documentary-in-progress is Wisdom Gone Wild. The film chronicles her sixteen year journey of elder care for her mother who had dementia, and illuminates their lifelong passion for the arts and the language of the elders.

In 1932, Celine Navarro was buried alive by her own community in Northern California. This is an attempt to uncover the real story, revealing Navarro’s feminism and resistance in a time when neither was embraced, as well as the silences that haunt Filipino-American communities to this day.
Learn more
Shopping Cart