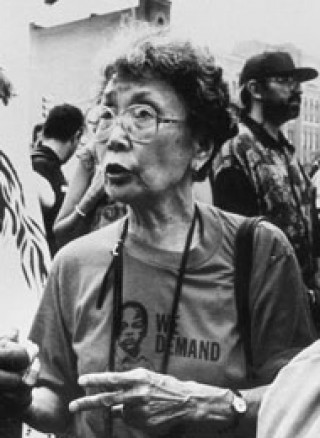 A film by Pat Saunders and Rea Tajiri

Yuri Kochiyama was a Japanese American woman who lived in Harlem for more than 40 years and had a long history of activism on a wide range of issues. Through extensive interviews with family and friends, archival footage, music and photographs, YURI KOCHIYAMA chronicles this remarkable woman’s contribution to social change through some of the most significant events of the 20th century, including the Black Liberation movement, the struggle for Puerto Rican independence, and the Japanese American Redress movement. In an era of divided communities and racial conflict, Kochiyama offered an outstanding example of an equitable and compassionate multiculturalist vision.

“Finds a shared identification with both younger and older generations of activists.”

REA TAJIRI is a filmmaker and visual artist who was born in Chicago, Illinois. She earned her BFA and MFA degree from the California Institute of the Arts in post-studio art. Her ground-breaking, award-winning film, digital video and installation work, has been supported by numerous grants, fellowships and artistic residencies, has been exhibited widely in museums, on television and in international film festivals.

Poetic, subtly layered and politically engaged, her work advances the exploration of forgotten histories, multi-generational memory, landscape and the Japanese American experience. Her experimental documentary History and Memory; for Akiko; Takashige, and feature film Strawberry Fields have influenced a generation of filmmakers, leading to their inclusion in Asian American, Cinema Studies, Women’s and Gender Studies curricula in the US.

Her recent multi-site installation project Wataridori-birds of Passage (2018) in Philadelphia mapped and enlivened forgotten traces of local Japanese American history linked in a series of locations around the city. Her feature documentary Lordville (2014) probed the
material and immaterial traces of an upstate New York town’s history. Her current documentary-in-progress is Wisdom Gone Wild. The film chronicles her sixteen year journey of elder care for her mother who had dementia, and illuminates their lifelong passion for the arts and the language of the elders.