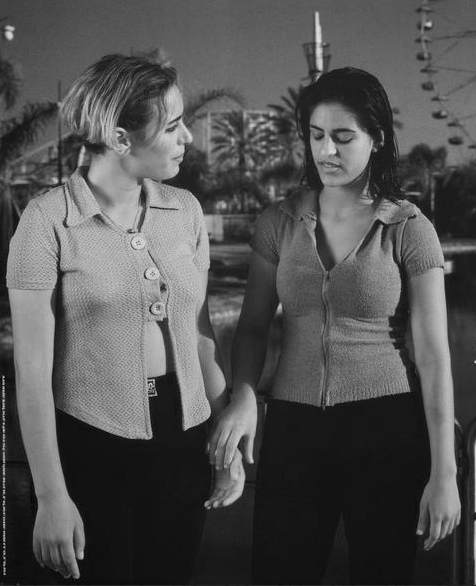 This moving, closely observed portrait of adolescence documents one summer in the lives of two 17 year old cousins named Jenny. As North African Jewish immigrants living on Israel's working class Mediterranean coast, the girls' changing environment provides a fascinating window into a culture both religious and secular. In struggling towards self-definition, their experiences embody universal concerns of young women. An intimate look at the cousins at school, at home, and with friends, JENNY AND JENNY sensitively depicts the fragility and power of girls moving towards womanhood.

"Beautiful, funny, absorbing...explores the influence of religion, custom, and class on girls still full of hope."

"Wonderful...a sad and delightful description of the cultural and social world of two Israeli teenage girls."

Israeli filmmaker Michal Aviad provides a woman's take on how national culture is informed by male identity through the military experience that bonds her country's Jewish men. EVER SHOT ANYONE? documents Aviad's attempt to infiltrate the world of army reservists during their annual tour of duty on the Golan Heights. Gradually, but not without suspicion and hostility toward the intruder in their midst, the middle-aged civilian-soldiers reveal notions about male identity, friendship, family and gender relations. This dominant male culture through the eyes of the ultimate outsider--a woman.
Learn more

An invigorating antidote for American culture's one-dimensional image of older women, this classic film offers empowering insights about women and aging for every generation. Personal portraits of six ordinary women in their 60's and 70's who share their lives. In candid interviews that tackle a range of thought-provoking topics, including self-image, sexuality, financial concerns, dying, and changing family relationships, members of the group display both a vibrant strength of spirit and inspiring zest for life.
Learn more

THE WOMEN NEXT DOOR is a thoughtful and emotive documentary about women in the Palestinian-Israeli conflict. Israeli director Michal Aviad was living in the United States when the Intifada broke out in the West Bank and Gaza. Filled with questions about how the Occupation affected women on both sides of the conflict she set off in a journey through Israel and the Occupied Territories with two other women -- a Palestinian assistant director and an Israeli cinematographer. The film explores the roles that the Occupation designated for women on both sides and the questions it raises. In a world of occupation, what is the meaning of femininity, motherhood, birth, violence, compassion and solidarity between women? Can the womanhood of Israelis and Palestinians be separated from their political reality? The women next door are the women on either side of the border, as well as, those who face the camera and those who stand behind it. THE WOMEN NEXT DOOR provides a unique perspective on women’s lives in the Middle East and the critical part they play in rebuilding societies ravaged by war.
Learn more
Shopping Cart