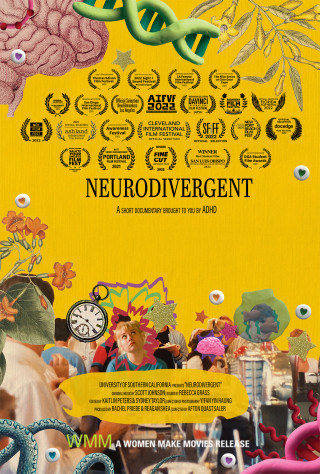 In this profoundly personal mixed-media experience inside the ADHD mind, a 35-year-old film student interrogates her past and future, while trying to make sense of this misunderstood disorder.

In this profoundly personal mixed media experience inside the ADHD mind, NEURODIVERGENT (dir. Afton Quast Saler) follows the filmmaker’s journey as she discovers her ADHD diagnosis during the height of the Covid-19 pandemic. From Post-it notes to magnets, keys, pens, rubber bands, and receipts, the unorganized chaos of a junk drawer is the perfect representation of what Afton Quast Saler’s brain feels like every day. Growing up, she knew she wasn’t like the other kids but never really understood why, and doctors didn’t seem to be much help. She was diagnosed with depression, anxiety, rapid cycle bipolar, fibromyalgia, addiction disorders, premenstrual dysphoric disorder, insomnia, and dyslexia – but none of those diagnoses felt right.

In March 2020, at the beginning of the Covid-19 pandemic and in her third year at USC School of Cinematic Arts, Afton underwent extensive psychological tests and was diagnosed with something she never even considered: ADHD. In a unique way of coping with this new information, she courageously decides to put herself in front of the camera and, with the help of her husband, Jesse, documents this very personal journey. Her bible soon becomes the 1995 book, Women with Attention Deficit Disorder: Embrace Your Differences and Transform Your Life, as she learns that she is not the only young girl to have silently suffered in school. In fact, women with ADHD are more often under-diagnosed than men, as well as commonly misdiagnosed and treated for anxiety and mood disorders as primary diagnoses. Finally feeling understood, Afton is thrilled to have the opportunity to meet the author of the book and superstar advocate in the ADHD world, Sari Solden. With Sari’s help, Afton recognizes that her life-long pattern of negative thoughts and feelings were not the result of the learning disability itself but rather the shame of not being able to fully inhabit her genuine self.

"Afton Quast Saler gives us a firsthand experience of receiving an ADHD diagnosis, vulnerably making herself the subject of her own story and uncovering a largely underrepresented one – women with ADHD are less likely to receive treatment than men. Stylish animation and bold editing choices give us a glimpse of what her brain thinks and feels, adding intelligence and heart. I happily accept the invitation to join Afton on this emotional ride, and I encouraged you to as well."

"In a personal and insightful mixed-media experience inside the ADHD mind. A 35-year-old film student is diagnosed with ADHD leading to questions about her past and future, while trying to make sense of this misunderstood disorder.”

"Neurodivergent" is a highly personal documentary about the inner workings of Saler’s mind following her diagnosis of ADHD as an adult woman.”

Afton grew up in Anaheim, California, where she started her professional acting career at 13 years old. She has toured the U.S. and Europe with The Young Americans, an educational outreach and performing group, as well as working in regional theaters across the country, including New York, California, Utah, and Maine, to name a few. She trained acting at the T. Schreiber Studio in New York City, BGB Studios in Los Angeles, and sketch comedy at Second City Hollywood, where she would discover the purest reflection of herself in a passion for writing, directing, and creating her own work.

Since moving back to Los Angeles to attend the University of Southern California's School of Cinematic Arts and graduating with a degree in production, Afton has continued to work in both film and theatre. Afton directed the Encore Award-winning production of Cheek (and other stories) at the Hollywood Fringe Festival, directed and co-wrote the pilot for the TV Series Emmiething Goes, as well as directed and wrote the HFPA Center for Cinema & Television award-winning short film, Brothel Sprouts.

Currently, she lives and freelances in Pasadena, CA, with her husband Jesse, their dog Johanna, and the wild parrots that live in the tree outside their window. (10/22)

Animation by: Alice On and Yifan Yin Huang

A chorus of voices recite Black feminist poet Audre Lorde’s 1980 memoir of her cancer experience, and reflect upon its personal and political impact in the present moment.
Learn more

"I was always so afraid that someone would ask me (where I was when JFK was shot), and I would have to say I was in a mental institution", says director Allie Light. This moving and informative film features seven women--including the filmmaker--describing their experiences with manic depression, multiple personalities, schizophrenia, euphoria and recovery. Candid interviews are enriched with dramatic reenactments and visualizations of each woman's history, emotions, and dreams--the private symbols of madness and sanity. The social dimensions of women and mental illness are revealed in testimony about sexual assault, incest, racism and homophobia, the abuses of the medical establishment, family, and church. Acknowledging that "madness" is often a way of explaining women's self-expression, this film charges us to listen to the creativity and courage of survivors. Produced by the Academy Award winning filmmakers of IN THE SHADOWS OF THE STARS, DIALOGUES WITH MADWOMEN is a ground-breaking film about women and mental illness.
Learn more

Uphill All the Way

UPHILL ALL THE WAY is the astounding true story of five troubled teenage girls who face the challenge of their lives: a 2,500-mile bicycle journey along the United States Continental Divide. The girls are students at the DeSisto School, a rehabilitative high school in Massachusetts for drug addicts, victims of sexual abuse, and juveniles that have had run-ins with the law. Despite the emotional risks posed by their unstable backgrounds, they sign up for the bike trip as an opportunity to prove individually and collectively that they can reach once unfathomable heights. If finished, the trek will be the first time in their lives the girls have set a goal and met it. Over the course of three months, they mature in ways that are visible, thought provoking and completely unexpected. Rather than portray these girls as victims, UPHILL ALL THE WAY highlights their resilience and ability to persevere despite great emotional and physical barriers. Providing much-needed alternatives for young women to learn how to improve their self-esteem, this unique documentary is an inspiration for every viewer – both young and old – to accomplish great feats in their lives. Narrated by Susan Sarandon.
Learn more

Acclaimed filmmaker Cathy Cook (THE MATCH THAT STARTED MY FIRE) breaks new cinematic territory by devising a new visual language that explores the psychological and emotional effects of physical confinement in her latest film, BEYOND VOLUNTARY CONTROL. Stimulating the senses through haunting and poetic images, the film imaginatively conveys the obsessions, phobias and illnesses constricting personal freedom. While lyrically meditating on the limits of the body, Cook incorporates the evocative movements of modern dancer, David Figueroa, and blends a mesmerizing soundtrack set to the poems by Emily Dickinson and Sharon Olds. Through Figueroa’s gestures and dance, along with a moving interview of Cook’s own mother suffering from Parkinson’s, the film succeeds in humanizing and reconciling the effects of physical metamorphosis and stasis. Through artistry and visual astuteness, BEYOND VOLUNTARY CONTROL innovatively investigates the limits of human physicality and movement.
Learn more

Vanalyne Green's childhood world, growing up with alcoholic parents, is recreated through crayon drawings, family albums, excerpts from her adolescent diary and her interpretation of subsequent events in her life-including her own bulimia and her relationships with men.
Learn more

This short dramatic film brings to life the classic Charlotte Perkins Gilman story of the same name, which has become an important addition to American literature course curricula. Set in the late 1800s, the story features Elizabeth, an aspiring writer who becomes ill and is forced by her doctor and her husband to take a "rest cure." Completely isolated, her mind creates a world inside the wallpaper in her room-a world in which a woman is trapped and unable to escape.
Learn more
Shopping Cart