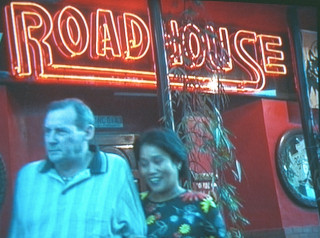 A film by Ursula Biemann

In Biemann’s film, she traces the routes and reasons of women who travel across the globe for work in the sex industry. By using the latest images from NASA satellites, the film investigates the consequences of the U.S. military presence in southeast Asia as well as European migration politics. This essay takes an earthly perspective on cross-border circuits, where women have emerged as key actors and expertly links new geographic technologies to the sexualization and displacement of women on a global scale. By revealing how technologies of marginalization affect women in their sexuality, REMOTE SENSING aspires to displace and resignify the feminine within sexual difference and cultural representation.

“An artistic triumph, Biemann's tape provides a searing account of the parasitic networks of global, sexual trafficking in the digital age.”

“Biemann navigates a unique path through critical dialogues on the global sex trade, feminist geography and media activism and her video will become a natural resource for anyone interested in these areas."

"Hand in hand with her critique of digital technologies of visualization, Biemann constructs a thought-provoking visual rendering of instances of national impoverishment as well as of the strategies for economic development that rest on the exploitation of women’s sexual labor."

Ursula Biemann is an artist, writer, and video essayist based in Zurich, Switzerland. Her artistic practice is strongly research oriented and involves fieldwork in remote locations where she investigates climate change and the ecologies of oil and water, as in her recent projects Acoustic Ocean (2018), Forest Law (2014), and Deep Weather (2013). Her earlier work focused on global relations under the impact of the accelerated mobility of people, resources and information, e.g. in the widely exhibited art and research project Sahara Chronicle on clandestine migration networks or her early video works examining the role of gender in the global reorganization of labor in Performing the Border. She is cofounder of World of Matter, an online collective art and media platform on resource geographies. Her video installations are exhibited worldwide in museums and at International Art Biennials in Liverpool, Sharjah, Shanghai, Sevilla, Istanbul, Montreal, Venice and Sao Paulo. She had comprehensive solo exhibitions at Neuer Berliner Kunstverein and Helmhaus Zurich among others. Biemann received the 2009 Prix Meret Oppenheim, the Swiss Grand Award for Art and a honorary degree in humanities from the Swedish University in Umeå. (7/19)

The fourth in Ursula Biemann's critically acclaimed series of video essays that investigates migration across borders, EUROPLEX, a collaboration with Angela Sanders, tracks the daily, sometimes illicit, border crossings between Morocco and Spain- a rare intersection of the first and third worlds. Paying off officials to look the other way, workers smuggle contraband across the border, sometimes crossing up to 11 times a day. In a now common scenario of global economics, Moroccan women work in North Africa to produce goods destined for the European market. And in perhaps the most surreal example of border logic, domesticas commute into a Spanish enclave in Moroccan territory, losing two hours as they step into the European time zone. With a mesmerizing soundtrack and a dizzying blend of video footage, digital graphics and text, the film exposes a fascinating, often hidden layer in the cultural and economic landscape between Europe and Africa- revealing the new rules and profound implications of globalization.
Learn more

"Ursula Biemann’s WRITING DESIRE is a video essay on the new dream screen of the Internet and how it impacts on the global circulation of women’s bodies from the third world to the first world. Although under-age Philippine 'pen pals' and post-Soviet mail-order brides have been part of the transnational exchange of sex in the post-colonial and post-Cold War marketplace of desire before the digital age, the Internet has accelerated these transactions. Biemann provides her viewers with a thoughtful meditation on the obvious political, economic and gender inequalities of these exchanges by simulating the gaze of the Internet shopper looking for the imagined docile, traditional, pre-feminist, but Web-savvy mate. WRITING DESIRE delights in implicating the viewer in the new voyeurism and sexual consumerism of the Web. However, it never fails to challenge pat assumptions about the impossibility for resistance and the absolute victimization of women who dare to venture out of the third world and onto the Internet to look for that very obscure object of desire promised by the men of the West. This film will promote lively discussion on third world women, the sex industry, mail order brides, racism and feminist backlashes in the West, and on women’s sexuality, desire, and new technologies." --Gina Marchetti, Ithaca College
Learn more

A video essay set in the Mexican-U.S. border town of Ciudad Juarez, where U.S. multinational corporations assemble electronic and digital equipment just across from El Paso, Texas. This imaginative, experimental work investigates the growing feminization of the global economy and its impact on Mexican women living and working in the area. Looking at the border as both a discursive and material space, the film explores the sexualization of the border region through labor division, prostitution, the expression of female desires in the entertainment industry, and sexual violence in the public sphere. Candid interviews with Mexican women factory and sex workers, as well as activists and journalists, are combined with scripted voiceover analysis, screen text, scenes and sounds recorded on site, and found footage to give new insights into the gendered conditions inscribed by the high-tech industry at its low-wage end.
Learn more

The Price of Sex

An unprecedented and compelling inquiry, THE PRICE OF SEX sheds light on the underground criminal network of human trafficking and experiences of trafficked Eastern European women forced into prostitution abroad. Photojournalist Mimi Chakarova’s feature documentary caps years of painstaking, on-the-ground reporting that aired on Frontline (PBS) and 60 Minutes (CBS) and earned her an Emmy nomination, Magnum photo agency’s Inge Morath Award, and a Webby for Internet excellence. Filming undercover with extraordinary access, even posing as a prostitute to gather her material, Bulgarian-born Chakarova travels from impoverished rural areas in post-Communist Eastern Europe, including her grandmother’s village, to Turkey, Greece, and Dubai. This dangerous investigative journey brings Chakarova face to face with trafficked women willing to trust her and appear on film undisguised. Their harrowing first-person accounts, as well as interviews with traffickers, clients, and anti-trafficking activists, expose the root causes, complex connections, and stark significance of sexual slavery today.
Learn more

Impassioned about freedom of sexual expression, Australian sex worker Rachel Wotton specializes in a long overlooked clientele— people with disabilities. Working in New South Wales—where prostitution is legal— Rachel’s philosophy is that human touch and sexual intimacy can be the most therapeutic aspects to our existence. Indeed, she is making a dramatic impact on the lives of her customers, many of whom are confined to wheelchairs or cannot speak or move unaided. Through her graduate studies and her nonprofit group Touching Base, Rachel both fights for the rights of sex workers and promotes awareness and access to sexual expression for the disabled through sex work—and brings together these two often marginalized groups. We follow her from conducting sex and disability workshops to speaking to the World Congress on Sexual Health about her mission to observing her overnight stays with severely disabled clients who blossom under her attention—with one man even gaining back lost movement and sensation thanks to his time spent with her. Rachel has made it her life’s work to end the stigma surrounding these populations; the depth, humor and passion in this positive and pro-active documentary will transform the way we see sex workers and people with disabilities forever.
Learn more
Shopping Cart