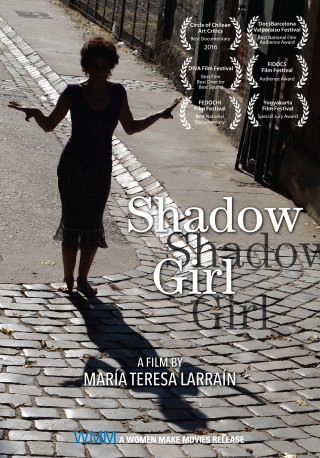 A film by María Teresa Larraín

SHADOW GIRL is the extraordinary story of a filmmaker struggling with the prospect of losing her vision.

SHADOW GIRL is the extraordinary story of a filmmaker struggling with the prospect of losing her vision. While editing her last film in Toronto, Chilean-born filmmaker María Teresa Larraín suddenly begins to go blind. After she’s denied disability benefits by the Canadian government, she returns home to Chile. There, inspired by the resilience and wisdom of the blind street vendors she meets, María Teresa confronts her fears and steps courageously into her new life while reclaiming her dignity and her voice as an artist. This powerful and poetic film raises complex questions about art and “vision,” able and dis-abled, and poverty and privilege.

"Larrain has become a paradoxical artist, a blind filmmaker committed to creating images she can no longer see.

"Extraordinary. Beyond its stylistic triumphs, Shadow Girl is a powerful look at how one woman learns to cope with disability."

"As much as this is a film about losing one’s sight, it is also about finding the inner strength to deal with the curveballs that life throws at us."

"An emotional and truly fascinating experience."

María Teresa Larraín, who studied Law and Drama in her native Chile, immigrated to Canada in 1976, where she worked for several years as a legal assistant and a community developer. After training in prestigious film institutions in Canada and the United States, she started working as an independent writer-director. Her films reflect the duality of living in, while constantly moving out and between these two worlds: her native Chile and Canada, her second home.

María Teresa's films range from the political: BESIEGED LAND to the personal and poetical: SHADOW GIRL. Her character-driven documentaries often focus on racialized and marginalized communities, poverty and the environment, diversity, social inclusion, aging and disability.
Her most recent film SHADOW GIRL (2016), an autobiographic film which follows her journey into blindness, had its World Premiere at DocsBarcelona (Official Section) in May 2016, where it screened to enthusiastic audiences who commented on the visual treatment of the film: "A surprisingly luminous film, a unique kind of light, which has rarely been seen in the large screen before", its sound: “The sound design of this film is splendid, extraordinary rich, full of subtle details, as well as brilliant colours" and the story: "A compelling journey into the depths of blindness in an autobiographic narration full of courage and a sense of humour".

SHADOW GIRL had its Chilean Premiere at the Gala section of Sanfic (the Santiago International Film Festival) in August 2016 and in November of the same year, the film participated and won several awards in the following festivals: Fidocs (Santiago International Documentary Film Festival), DIVA (Diversity Film Festival of Valparaíso), DocsBarcelona Valparaíso and Fedochi, (International Film Festival of Chiloé).
The award winning BESIEGED LAND (2007) was María Teresa’s first feature length documentary and followed the conflict between a powerful landowner and a respected Mapuche Chief who fight over contested land in the South of Chile. The film screened in Latin American and international festivals and is now part of the permanent collection of the Smithsonian National Museum of the American Indian in New York.

Her earlier one hour documentaries: BITTER LOVE, DOLORES and LOOKING FOR FINDLEY were sold to Tele Latino and Bravo! (Canada). WE WERE ALL GOING TO BE QUEENS and PASSIONATE INVOLVEMENT screened in non-commercial venues and distributed by the Working Women Community Centre and A Space Gallery in Toronto.

Between SHADOW GIRL and BESIEGED LAND, María Teresa developed two other feature length documentaries: DON’T PART WITHOUT SAYING GOOD BYE, a tale of loss, fear, guilt and betrayal set in the times of the military regime in Chile, and A PRIVATE MATTER, the story of two small fishing villages which fight a paper mill company over the construction of a duct which will spill toxic waste into the sea. Although the director had to abandon these projects because of her impending blindness, she is now returning to them to transform them in Transmedia projects. Concurrent with her enrollment in Disability Studies at Ryerson University in Toronto, Maria Teresa Larraín is developing an itinerant exhibition of Shadow Girl in Chile, Canada and Costa Rica; the three production countries of the film. In addition, she is working on a new project called BEYOND THE SHADOWS. This interactive documentary exploring sound, touch, light, and other ways of ‘seeing’ is a co-production of Maremoto Productions and Mucha Media. The project won the Hackathon Award in Valparaíso and was selected as one of the four projects pitched at DocsBarcelona, Spain, in May 2017. (11/17)

Impassioned about freedom of sexual expression, Australian sex worker Rachel Wotton specializes in a long overlooked clientele— people with disabilities. Working in New South Wales—where prostitution is legal— Rachel’s philosophy is that human touch and sexual intimacy can be the most therapeutic aspects to our existence. Indeed, she is making a dramatic impact on the lives of her customers, many of whom are confined to wheelchairs or cannot speak or move unaided. Through her graduate studies and her nonprofit group Touching Base, Rachel both fights for the rights of sex workers and promotes awareness and access to sexual expression for the disabled through sex work—and brings together these two often marginalized groups. We follow her from conducting sex and disability workshops to speaking to the World Congress on Sexual Health about her mission to observing her overnight stays with severely disabled clients who blossom under her attention—with one man even gaining back lost movement and sensation thanks to his time spent with her. Rachel has made it her life’s work to end the stigma surrounding these populations; the depth, humor and passion in this positive and pro-active documentary will transform the way we see sex workers and people with disabilities forever.
Learn more

Women make up 15 percent of today's military. That number is expected to double in 10 years. SERVICE highlights the resourcefulness of seven amazing women who represent the first wave of mothers, daughters and sisters returning home from the frontless wars of Iraq and Afghanistan. Portraying the courage of women veterans as they transition from active duty to their civilian lives, this powerful film describes the horrific traumas they have faced, the inadequate care they often receive on return, and the large and small accomplishments they work mightily to achieve. These are the stories we hear about from men returning from war, but rarely from women veterans. Through compelling portraits, we watch these women wrestle with prostheses, homelessness, Post Traumatic Stress Disorder and Military Sexual Trauma. The documentary takes the audience on a journey from the deserts of Afghanistan and Iraq to rural Tennessee and urban New York City, from coping with amputations, to flashbacks, triggers and depression to ways to support other vets. An eye-opening look at the specific challenges facing women veterans with a special focus on the disabled, SERVICE can be used for courses in military studies, women’s studies, peace and conflict courses and veteran support groups.
Learn more

From Emmy®-nominated IN THE FAMILY filmmaker Joanna Rudnick and Chicago’s Kartemquin Films comes a story about challenging norms and redefining beauty. ON BEAUTY follows fashion photographer Rick Guidotti, who left the fashion world when he grew frustrated with having to work within the restrictive parameters of the industry’s standard of beauty. After a chance encounter with a young woman who had the genetic condition albinism, Rick re-focused his lens on those too often relegated to the shadows to change the way we see and experience beauty. At the center of ON BEAUTY are two of Rick's photo subjects: Sarah and Jayne. In eighth grade Sarah left public school because she was bullied so harshly for the birthmark on her face and brain. Jayne lives with albinism in Eastern Africa where society is blind to her unique health and safety needs and where witch doctors hunt people with her condition to sell their body parts. We follow Rick as he uses his lens to challenge convention and media’s narrow scope of with the help of two extraordinary women.
Learn more

DEFIANT LIVES is a triumphant film that traces the origins of the world-wide disability rights movement.
Learn more
Shopping Cart