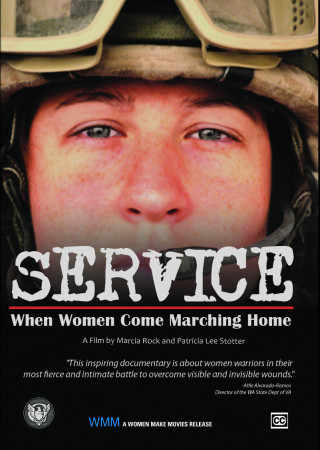 Women make up 15 percent of today's military. That number is expected to double in 10 years. SERVICE highlights the resourcefulness of seven amazing women who represent the first wave of mothers, daughters and sisters returning home from the frontless wars of Iraq and Afghanistan. Portraying the courage of women veterans as they transition from active duty to their civilian lives, this powerful film describes the horrific traumas they have faced, the inadequate care they often receive on return, and the large and small accomplishments they work mightily to achieve.

These are the stories we hear about from men returning from war, but rarely from women veterans. Through compelling portraits, we watch these women wrestle with prostheses, homelessness, Post Traumatic Stress Disorder and Military Sexual Trauma. The documentary takes the audience on a journey from the deserts of Afghanistan and Iraq to rural Tennessee and urban New York City, from coping with amputations, to flashbacks, triggers and depression to ways to support other vets. An eye-opening look at the specific challenges facing women veterans with a special focus on the disabled, SERVICE can be used for courses in military studies, women’s studies, peace and conflict courses and veteran support groups.

“This work is a delicately balanced portrayal of our women warriors' battles and victories over insurmountable odds...a must see!"

"Highly recommended…an excellent probe of PTSD among female veterans, along with a broad analysis of the hurdles encountered by women in our armed services."

“Without doubt, the most powerful film I’ve seen about women veterans. It tears you to pieces to watch it and restores your soul . . . all at the same time. It’s a documentary about hope. It’s the best film you haven’t seen yet. Tell everyone you know about it."

"The film stuns. These women veterans show extraordinary character and resolve as they deal with unforgiving injuries, and a culture dull with ignorance. Hawk or dove, we need to understand and appreciate this special group."

Marcia Rock is an independent filmmaker who has produced many documentaries on women's issues. "Salt Harvesters of Ghana" (2007) captures the dignity of women working in a grueling landscape. It won best short at the Newburyport Documentary Film. "Writers' Rooms: The Making of a Mural" (2008) follows painter Elena Climent's research of six American writers' workspaces. Her documentary on the changing role of women in Northern Ireland, "Daughters of the Troubles: Belfast Stories" (1997) won many awards including the AWRT Grand Documentary Award. She has produced several pieces on New York City and writers. McSorley's New York won an Emmy in 1987. "Village Writers: the Bohemian Legacy" (1990) recounts the literary history of Greenwich Village. Reynolds Price: a Writer's Inheritance (1989) explores the powerful relationship between family history and art. Rock's films have also gone in more personal direction. "Dancing with My Father" (2003), ponders how adult love is shaped by what a child learns at home and "Surrender Tango" (2006) compares the rules and roles of tango with contemporary relationships. Rock is a professor and Director of News and Documentary at the NYU Arthur Carter Journalism Institute. She is co-author with Marlene Sanders of, Waiting for Prime Time: The Women of Television News. Her work has been featured on Public Television and cable. Her films are currently in distribution with Cinema Guild, Filmmakers Library, Create Space/Amazon.com and Women Make Movies. (3/13)

A two time Emmy Award winner, Patricia Lee Stotter composes for film, theatre and television. From Sesame Street to HBO/PBS documentaries, independent features to plays and musicals, Stotter is all about the right voice at the right time. (9/18)

I Wonder What You Will Remember of September

Cecilia Cornejo presents a haunting personal response to the events of September 11, 2001, informed and complicated by her status as a Chilean citizen living in the U.S. With evocative imagery from both past and present, Cornejo weaves together her own fading childhood memories, her parents vivid recollections of the September 11, 1973 coup in Chile that brought the notorious dictator Augusto Pinochet to power; and post-9/11 conversations with her own young daughter. The resulting montage thoughtfully explores how personal and collective histories intersect, as well as how trauma is lived, supposedly erased, and passed on from one generation to the next. The filmmaker also alludes to what she believes is a deep contradiction within the American consciousness, one that makes it possible to view the 9/11/01 attacks as tragedy, while failing to interpret “outside” events such as the Chilean coup or the invasion of Iraq as such. Cornejo’s mesmerizing experimental film provides a striking new context with which to view the World Trade Center attacks— from the point of view of an immigrant whose home country has endured its own tragedies.
Learn more

My Home - Your War

MY HOME – YOUR WAR offers an extraordinary look at the effect of the Iraq war through the eyes of an ordinary Iraqi woman. Shot in Baghdad over three years that span the time before, during and after the invasion of Iraq, this profoundly moving film brings a perspective that – until now – has rarely been available to U.S. audiences. This film combines insightful interviews with Layla Hassan and her family, vibrant scenes of Baghdad and intimate footage shot by Layla herself to paint a compelling picture of how the war has affected average Iraqis. As Islamic fundamentalism takes hold in the chaos of Baghdad, her shy teenage son turns to militancy, her once-progressive sister dons the veil, and whatever freedom Layla once had under Saddam Hussein’s secular rule is steadily being eroded. While facts about the Iraq war garner much U.S. media attention, My Home – Your War is a deeply compelling account of something seldom discussed: how the Iraq war has created a situation where the rise of fundamentalism is putting women’s rights increasingly at risk.
Learn more

When World War II broke out, reporter Martha Gellhorn was so determined to get to the frontlines that she left husband Ernest Hemingway, never to be reunited. Ruth Cowan’s reporting was hampered by a bureau chief who refused to talk to her. Meanwhile, photojournalist Dickey Chappelle wanted to get so close to the action that she could feel bullets whizzing by. This award-winning documentary tells the colorful story of how these three tenacious war correspondents forged their now legendary reputations during the war—when battlefields were considered no place for a woman. Narrated by Emmy® Award winner Julianna Margulies, this film features an abundance of archival photos and interviews with modern female war correspondents, as well as actresses bringing to life the written words of these remarkable women. Their repeated delegation to the sidelines to cover the “woman’s angle” succeeded in expanding the focus of war coverage to bring home a new kind of story— a personal look at the human cost of war. NO JOB FOR A WOMAN: THE WOMEN WHO FOUGHT TO REPORT WWII has been made possible in part by a major grant from the National Endowment for the Humanities.
Learn more

Canada is one of a handful of countries that permit women to fight in ground combat. In January 2013, the Pentagon lifted its ban on women in combat roles. In 2016, for the first time in American history, women will be permitted to train as combat soldiers. Sisters In Arms reveals the untold stories of three remarkable women in the most difficult and dangerous military professions: facing combat on the frontlines in Afghanistan. Corporal Katie Hodges is a determined infantry soldier; Corporal Tamar Freeman, a trained medical professional; and Master Corporal Kimberley Ashton, a combat engineer and mother who has left behind three young daughters. Using video diaries filmed by the soldiers in Afghanistan and intimate personal interviews, Sisters in Arms tells their stories of loss and inspiration from a uniquely female perspective, challenging our perceptions of what constitutes a soldier.
Learn more

SHADOW GIRL is the extraordinary story of a filmmaker struggling with the prospect of losing her vision.
Learn more

DEFIANT LIVES is a triumphant film that traces the origins of the world-wide disability rights movement.
Learn more
Shopping Cart