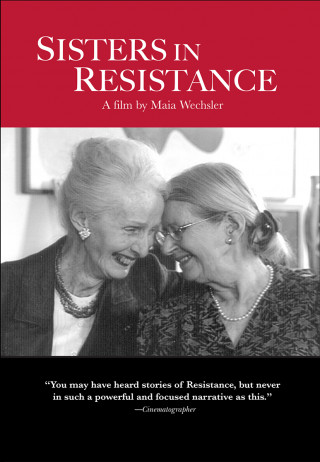 A film by Maia Wechsler

“This compelling documentary shares the story of four French women of uncommon courage who, in their teens and twenties, risked their lives to fight the Nazi occupation of their country. Neither Jews nor Communists, they were in no danger of arrest before they joined the Resistance. They could have remained safe at home. But they chose to resist. Within two years all four were arrested by the Gestapo and deported as political prisoners to the hell of Ravensbruck concentration camp, where they helped one another survive. Today, elderly but still very active, they continue to push forward as social activists and intellectual leaders in their fields. The film captures their amazing lives, and reveals an uncommon, intense bond of friendship that survives to this day.” - Human Rights Watch International Film Festival

“With a deft gift for storytelling, first time filmmaker Maia Wechsler, captures the courage and dignity of four not so ordinary French women who decided that they could resist and make a difference during the Nazi occupation of their country during WWII.”

“This story of sisterhood and moral courage had a roomful of filmgoers misting over in sadness and admiration.”

“You may have heard stories of Resistance, but never in such a powerful and focused narrative as this. I urge you to view this film…”

Maia Wechsler has worked in documentary film in New York City for eight years. Prior to her work in film, she was a journalist in Paris, where her immersion in the history of France during the Nazi occupation led to her film SISTERS IN RESISTANCE. Her work in documentary film and video includes co-producer of the feature-length LIFTING THE FOG: THE BOMBING OF HIROSHIMA AND NAGASAKIi; producer and director, IN WORD AND DEED, about an activist church on New York’s Lower East Side; editor, Life Choices, a syndicated medical show; assistant editor, dance segment, ACCENT ON THE OFFBEAT, for Maysles Films; assistant editor, a series of TV commercials for Maysles Films; assistant editor, FALLEN CHAMP: THE UNTOLD MIKE TYSON STORY, directed by Barbara Kopple; assistant editor, A PERFECT CANDIDATE; assistant editor, THE ORPHAN TRAINS; and production manager, MY KNEES WERE JUMPING: REMEMBERING THE KINDER TRANSPORTS.

As a journalist, Ms. Wechsler was special correspondent for U.S. News and World Report in Paris, for which she covered the trial of Nazi war criminal Klaus Barbie, and managing editor of Passion, an English-language Paris city monthly. Back in the United States, she was a business and arts writer at The Times in Trenton, New Jersey. As a student in Paris and New York, she studied and wrote about the anti-Jewish laws of Vichy France and did original research on the American government response to Vichy anti-Semitism. (09/09)

Marceline. A Woman. A Century

At only 22, Hungarian poet Hannah Senesh made the ultimate sacrifice – having already escaped Nazi-occupied Europe for Palestine and freedom, she returned, parachuting in behind enemy lines in a valiant effort to save Hungary’s Jews from deportation to Auschwitz and certain death. Captured immediately upon crossing the border into Hungary, Hannah was tortured and taken to a prison in Budapest, yet she refused to reveal the coordinates of her fellow resistance fighters - even when they also arrested her mother, Catherine. Hannah became a symbol of courage for her fellow prisoners, encouraging them to remain in good spirits, never losing faith in her Jewish identity, even as she was led out to be executed by firing squad. Narrated by Academy Award® Nominee Joan Allen, BLESSED IS THE MATCH is a truly moving memorial that brings to life this Holocaust heroine through interviews with Holocaust historians, eyewitness accounts from those on the rescue operation as well as in the prison, rare family photographs and the writings of Hannah and her mother. The film recreates Hannah’s perilous and heartbreaking mission, reconstructs her defiant months in the Gestapo prison and – through Hannah’s diary entries and poetry – looks back on the life of a talented and complex girl who came of age in a world descending into madness.
Learn more

Why would a young person choose resistance rather than submission during Hitler's reign of terror while her world was collapsing around her? In this gripping documentary, three Jewish women answer this question by recalling their lives as teenagers in occupied Holland, Hungary and Poland, when they refused to remain passive as the Nazis rounded up local Jewish populations. Defying her family's wishes, each girl found an unexpected way of fighting back -- Barbara Rodbell, as a ballet dancer shuttling Jews to safe houses and distributing resistance newspapers; Faye Schulman, as a photographer and partisan waging guerrilla war against the Germans; and Shulamit Lack, as a leader in an underground Zionist group smuggling Jews across the border. Enriched by home movies, archival footage, and previously unpublished photographs, the women's varied and vibrant stories provide a unique look at Jewish resistance to Nazism, a subject all too often consigned to history's footnotes.
Learn more
Shopping Cart