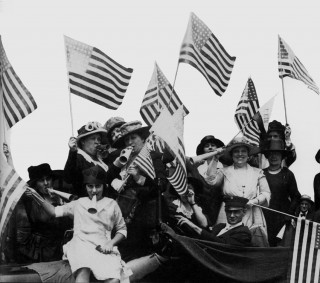 Suffragettes in the Silent Cinema

A Film by Kay Sloan

In the days before movies could talk, silent films spoke clearly of sexual politics, and in Suffragettes in the Silent Cinema, historian and writer Kay Sloan has assembled rare and wonderful footage that opens a historic window onto how women’s suffrage was represented in early American cinema.

Taking advantage of the powerful new medium, early filmmakers on both sides of the contentious issue of suffrage used film to create powerful propaganda and images about women. Suffragettes in the Silent Cinema contains clips from many films from the era, including: A Lively Affair (1912); A Busy Day (1914), which stars a young Charlie Chaplin in drag portraying a suffragist; and the pro-suffragist film, What 80 Million Women Want (1913), which includes an eloquent speech from president of the Women’s Political Union, Harriet Stanton Blatch.

Silent films may have passed into history, and their representations of feminists abandoning babies or stealing bicycles to attend suffragette meetings may now seem outrageous, but the struggle for gender equality and the issues surrounding representations of women in the media remain as fascinating, engaging, and relevant as ever.

“Very useful in illuminating the social and media context in which the women’s suffrage movement was active... [and] helps viewers consider connections to how women are treated by the media today.”

“This film won me over. Has archival value for identifying and compiling the surviving footage, and good commentary. I see a place for this in a women’s studies or film unit on representation.”

“Not only does [it] breathe new life into an art form that barely even exists, but it encapsulates a very definitive time period in which women were working hard to liberate themselves.”

“Wonderfully captures the passions and cruel prejudices that fueled the debates surrounding the struggle of American women and their male allies to win the vote, while also supplying the historical highlights that led to the passage of the Nineteenth Amendment.”

Kay Sloan's work has been groundbreaking in the field of woman suffrage and silent film. Working in the pre-digital era, Sloan located films made by woman suffragists to further their cause in an era when many motion pictures brutally satirized the "votes for women" movement. Her documentary, Suffragettes in the Silent Cinema, was the first to bring the surviving films to public attention in the 1970s. Now digitalized and expanded, Sloan's film has been shown in university classrooms and film festivals throughout the world. Her book, "The Loud Silents: Origins of the Social Problem Film," and her articles, "Sexual Warfare in the Silent Cinema" (American Quarterly) and "A Cinema In Search of Itself" (Cineaste), shaped the then-new field of the early women's movement and cinema.

Sloan earned her Ph.D. in American Studies from The University of Texas. She is also an award-winning novelist, poet and essayist, as well as cultural historian. Her novels, Give Me You, The Patron Saint of Red Chevys, and Worry Beads have won, respectively, the William Faulkner-Wisdom Prize for Novella, Barnes and Noble's Discover Great New Writers selection, nomination for the Mississippi Arts and Letters Book Award, and the Ohioana Award for Best Novel.
She is now Distinguished Professor Emerita at Miami University of Ohio. (7/19)

Women Who Made the Movies

From the very beginnings of motion picture history, women have played prominent roles in front of the camera. But little is known about the major roles women played behind the camera as directors, writers, editors and other creative roles. Women were making films of great importance at the same time that better known male directors such as Edwin S. Porter and D.W. Griffith were monopolizing cinema history. Until recently, many of their contributions have been forgotten or ignored. WOMEN WHO MADE THE MOVIES traces the careers and films of directors such as Alice Guy Blaché, arguably the first person to direct a film with a plot in 1896, "La Fée Aux Choux," who also experimented with color, synchronized sound, and films that gradually became more and more ambitious in length and subject matter. Others documented in this film include Ida Lupino, who also had a long career as an actor; Ruth Ann Baldwin, who directed numerous early westerns; Leni Riefenstahl, Hitler's film propagandist; as well as Dorothy Davenport Reid, Lois Weber, Kathlyn Williams, Germaine Dulac, Cleo Madison and many other women who made a lasting contribution to film history. WOMEN WHO MADE THE MOVIES features film clips, stills and other archival materials, bringing to life the work of these essential and often neglected filmmakers.
Learn more
Shopping Cart