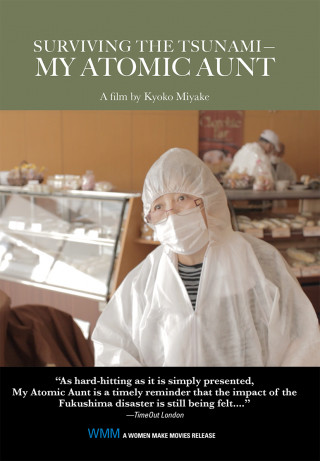 Surviving the Tsunami - My Atomic Aunt

A film by Kyoko Miyake

While Namie’s younger generations have permanently relocated elsewhere, Miyake’s Aunt Kuniko, like other older residents, has clung to dreams of eventually returning to her home. Over the course of a year, Miyake follows this warm, indomitable businesswoman as she recalls happy family memories and strives to adapt to life outside the contamination zone. In the process, Kuniko starts questioning her unconditional trust in Fukushima’s plant operators and pro-nuclear past in a community that once hoped to house a nuclear power station.

"An insightful and surprisingly funny story of a family adjusting to life after the tsunami. Through the attempts of the warm and indefatigable Aunt Kuniko to adapt at her ripe age, this deeply personal film explores notions of homeland, nuclear power and family love."

"Haunting and moving ….as hard-hitting as it is simply presented, MY ATOMIC AUNT is a timely reminder that the impact of the Fukushima disaster is still being felt...."

Kyoko's first feature-length documentary, MY ATOMIC AUNT (aka Beyond the Wave /Meine Tante aus Fukushima) was supported by 7 broadcasters and numerous grants including BBC, NHK, WDR and Sundance and has been screened and broadcast in many countries. Her second film, BRAKELESS, is a co-production with BBC Storyville, ITVS, NHK, IKON and DR, and it currently in post production.

Kyoko originally came to the UK to study history of English witchcraft at Oxford University as a Swire Centenary Scholar, having studied English history at Tokyo University. While studying and working for British and Japanese media, she picked up a camera to fulfill her childhood dream of becoming a filmmaker and started to make short films on her own. She still intends to remain true to her roots in history - but rather by making films about witchcraft in the future. (3/14)

Powerful political analysis is combined with a passionate personal story in this exceptional documentary about the Japanese women’s liberation movement in the 1970’s and its influence on contemporary Japanese society. Director Nanako Kurihara left her homeland in the 1980’s, frustrated by the lack of interesting roles for women in Japan. In New York, she met a Japanese woman who had been involved in the women’s liberation movement in Japan in the 1970’s. Kurihara returned to Japan, bringing together interviews with veterans of the movement, fascinating archival footage and her personal impressions to produce a film which explores the meaning of the liberation movement, the factors that motivated it and the effect it has had on people’s attitudes. RIPPLES OF CHANGE is an excellent resource for the study of global feminism, women’s roles and Japanese society.
Learn more

This fascinating documentary, produced for the BBC, opens a door into the spectacular world of the Takarazuka Revue, a highly successful musical theater company in Japan. Each year, thousands of girls apply to enter the male-run Takarazuka Music School. The few who are accepted endure years of a highly disciplined and reclusive existence before they can join the Revue, choosing male or female roles. DREAM GIRLS offers a compelling insight into gender and sexual identity and the contradictions experienced by Japanese women today.
Learn more

From the makers of DREAM GIRLS, SHINJUKU BOYS introduces three onnabes who work as hosts at the New Marilyn Club in Tokyo. Onnabes are women who live as men and have girlfriends, although they don't usually identify as lesbians. As the film follows them at home and on the job, all three talk frankly to the camera about their gender-bending lives, revealing their views about women, sex, transvestitism and lesbianism. Alternating with these illuminating interviews are fabulous sequences shot inside the Club, patronized almost exclusively by heterosexual women who have become disappointed with real men. This is a remarkable documentary about the complexity of female sexuality in Japan today.
Learn more

This award-winning documentary reveals the struggles of the citizens of Maclovio Rojas in Tijuana, Mexico as they battle the state government’s attempts to evict them from their homes to make way for multi-national corporations seeking cheap land and labor. Filmmaker Beth Bird followed the fiercely determined residents for three years as they persistently petitioned the state for basic services like running water, electricity and pay for their teachers, only to be met with bureaucratic stonewalling. Eventually, several community leaders are targeted for persecution, and one is arrested while others are forced into hiding. Balancing these stories of hardship, Bird also captures intimate scenes of daily life in Maclovio Rojas, revealing hard-won triumphs such as the building of a school by hand and the graduation of an elementary school class. This compelling and ultimately inspiring documentary is an eye-opening look at the human cost of globalization and a moving testament to the power of grassroots activism.
Learn more
Shopping Cart