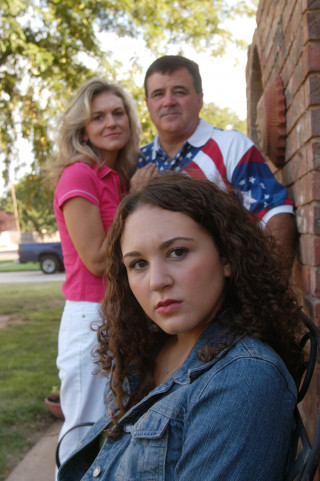 The Education of Shelby Knox

A film by Marion Lipschutz and Rose Rosenblatt

Winner of the Sundance Best Cinematography Award and the SXSW Audience Award, WMM is pleased to be finally releasing this fascinating and powerful documentary. Lubbock, Texas has an abstinence-only sex education policy in its schools and some of the highest teen pregnancy and STD infection rates in the nation. Shelby Knox is a devout Baptist teenager who has pledged abstinence until marriage. When her interest in politics leads her to get involved in a campaign for comprehensive sex education in her town's public schools, and then to a fight for a gay-straight alliance, she must make a choice: Stand by and let others be hurt, or go against her parents, her pastor, and her peers to do what she knows is right.

THE EDUCATION OF SHELBY KNOX is an exceptionally timely and intimate look at the cultural wars from the perspective of a young woman’s life. The support her conservative family provides is an example of how a healthy democracy could look given the time and will to listen.

“So many young people don't know what to think about sex education and issues of sexuality…this wonderful film…allows people into the conversation and gives them a way to think and talk about these issues.”

"Shelby’s instinctive quest to defend the underdog makes for a tremendous coming-of-age story and a reminder that even in the reddest of red states there are young progressive leaders among us."

Their work has been called "unique and memorable," "pure gold," and "balanced and truthful," by, respectively, the Milwaukee Journal, Hollywood Reporter and The New York Times. "Their fly-on-the-wall approach fulfills one of the glorious promises of documentary - to put us in the middle of situations we otherwise might never be in," wrote The Washington Post.

They have worked with HBO, TLC, Court TV, PBS National, Fenton Communications, The Jewish Foundation for the Righteous and Advocates for Youth, to name a few. Their latest film, Young Lakota, won Best Documentary at Red Nation Film Festival, Cine Las Americas, and the Smithsonian Native Cinema Showcase (SWAIA), and was an official selection at New Orleans Film Festival, Big Sky Film Festival, American Indian Film Festival, and Santa Fe Independent Film Festival. In 2005, their film THE EDUCATION OF SHELBY KNOX, launched the PBS’s Point of View series, after it premiered at the Sundance Film Festival, and went on to win dozens of top awards, including Best Cinematography at Sundance and the SXSW Audience Award.

Previous award winning work includes LIVE FREE OR DIE, the story of a doctor banned from teaching in his children’s schools because he provides abortions, a program again shown by PBS/Point of View with the distinction of airing as a November election special. For a change of pace they produced THE TRENCHCOAT GANG, about two bank robbers who stole more money than any other team in U.S. history. CODE BLUE, NEW ORLEANS, a series featuring doctors at Charity Hospital in New Orleans, a highly rated series for The Learning Channel. In addition to awards specific to their films, they’ve recently have won The Freedom of Expression Award, The Women in Leadership Award, and have been nominated for the British Index on Censorship.

Other PBS National work includes FATHERHOOD USA, a series on contemporary fatherhood and THE ABORTION PILL about the history of RU486. All of their PBS projects are accompanied by ancillary, web-based materials and are in widespread educational distribution. (8/14)

Rose Rosenblatt (born April 17, 1947) is an American film director, film editor, and co-founder of Incite Pictures. Her work includes Young Lakota (2013), The Education of Shelby Knox (2005), Live Free or Die (2000), Fatherhood USA (1998), and The Abortion Pill (1997). She has a BA in art history from Queens College and a MA in art history from Columbia University. Incite Pictures' films have won Best Cinematography at The Sundance Film Festival, The Audience Award at SXSW, The Audience and Jury Award at Cine Las Americas, Best Documentary at Red Nation Film Festival, Best Documentary at Native Cinema Showcase, The Emerging Picture Award at Full Frame, and The Jury Prize for Best Documentary at The Miami Gay and Lesbian Film Festival. Personal recognition includes The Full Frame Women in Leadership Award, The Hugh M. Hefner First Amendment Award, and a nomination for the British Index on Censorship’s Freedom of Expression Award. Though their topics have been specific to the United States, they have durable international appeal, showing in hundreds of festivals, including The Human Rights Watch Film Festival, Hot Docs, The Stockholm International Film Festival, The Seoul International Film Festival and The Festival de Rio de Janeiro. (8/14)

How to Lose Your Virginity

Female virginity. The US government has spent 1.5 billion dollars promoting it. It has fetched $750,000 at auction. There is no official medical definition for it. And 50 years after the sexual revolution, it continues to define young women’s morality and self-worth. This hilarious, eye-opening, occasionally alarming documentary uses the filmmaker’s own path out of virginity to explore its continuing value in our otherwise hypersexualized society. Layering vérité interviews and vintage sex-ed films with candid self-reflection and wry narration, Shechter reveals myths, dogmas and misconceptions behind this "precious gift." Sex educators, porn producers, abstinence advocates, and outspoken teens share their own stories of having - or not having - sex. In a culture where "Be sexy, but don’t have sex" is the overwhelming message to young women, the film goes through the looking glass to understand a milestone almost everyone thinks about but no one actually understands.
Learn more

Evangelical Christians are calling out for a second sexual revolution: chastity! As a counter-movement to the attitudes and practices of contemporary culture, one in eight girls in the U.S. today has vowed to remain "unsoiled" until marriage. But the seven children of Randy and Lisa Wilson, the Colorado Springs founders of the Purity Ball, take the concept one step further. They save even the first kiss for the altar. Following the Wilsons for two years, this impressive documentary observes the family’s life up close as some of their children prepare for their fairytale vision of romance and marriage, and seek out their own prince and princess spouses. As VIRGIN TALES takes in home routines, church services, social gatherings, conventions and purity balls, a broader theme emerges: how the religious right is grooming a young generation of virgins to embody an Evangelically-grounded Utopia in America.
Learn more