Amy Benson left her career as a middle school girls teacher to become a documentary filmmaker. Since switching fields, Benson has shot and edited over 30 short films telling the stories of nonprofits in North America, Africa and Asia. Her first independent documentary short, CALLED TO SHINE, about Clarksdale, Mississippi’s only female preacher premiered at the Langston Hughes film festival. Another short, THREE: IMPRESSIONS FROM THE STRUGGLE FOR GIRLS’ EDUCATION, was the centerpiece of the UNIFEM Singapore film festival. With her husband, Scott Squire, Amy co-owns Nonfiction Media, a production company based in Seattle. Amy is also a founding member of the Seattle Documentary Association - a community for Seattle filmmakers to thrive. Her first feature documentary, DRAWING THE TIGER, is a granted project of both the Sundance Institute and Fork Films. It premiered at Hot Docs in April 2015 and has since been in over 30 film festivals worldwide. It has been awarded the Best Feature Jury prize by the Northwest Film Forum, the Documentary Feature Award from CAAM Fest (Center for Asian American Media) and the UNICEF award at Film South Asia in Kathmandu, Nepal.

Amy has a Tedx talk about her experience making DRAWING THE TIGER. (01/20) 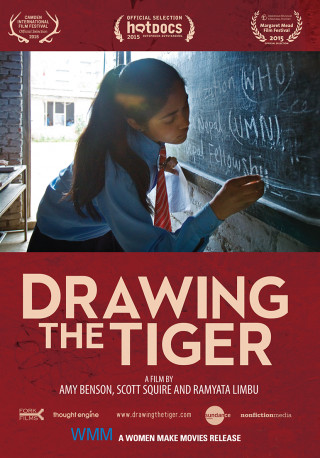 Shot over seven years, Drawing the Tiger takes a sweeping view of one Nepalese family’s daily struggle to survive off of subsistence farming. Eat, pay their debts, stay alive—that’s their day-to-day reality. But when their bright daughter receives a scholarship to study in Kathmandu, the family’s prospects suddenly improve by leaps and bounds overnight. They…