Beth Bird was a documentary filmmaker with works engaging vital contemporary social-issues such as globalization, popular resistance, and local community empowerment, drawing attention to and putting a human face on struggles for social justice. Her first feature-length film, EVERYONE THEIR GRAIN OF SAND (2005), won the 2005 Jury Award for Best Documentary at its U.S. premiere at the Los Angeles Film Festival, Best San Diego Feature at the San Diego Film Festival, and Festival Favorite at the Oxnard Film Festival. The film has screened nationally and internationally at major venues including at the Museum of Modern Art in New York; the Viennale (Vienna International Film Festival); InSITE 2005 in Tijuana, Mexico; The Play Gallery, Berlin; the Prague Biennale; and the Morelia International Film Festival in Morelia, Mexico. Other films include "D2KLA" (2000), which documents clashes between the police and protesters outside the Democratic National Convention in Los Angeles in August, 2000, and "Love Knows No Borders" (1997), which examines discrimination in U.S. immigration law against lesbians and gay men. In her film "Everyone Their Grain of Sand", Bird documents the struggle that border-town Maclovio Rojas has been facing in its relentless efforts to have access to basic human rights, like water and education. Beth passed away in 2021 at the age of 54. (04/21) 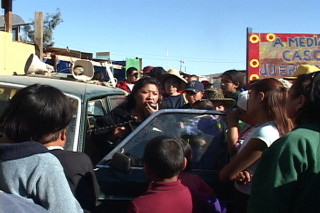 This award-winning documentary reveals the struggles of the citizens of Maclovio Rojas in Tijuana, Mexico as they battle the state government’s attempts to evict them from their homes to make way for multi-national corporations seeking cheap land and labor. Filmmaker Beth Bird followed the fiercely determined residents for three years as they persistently petitioned the…