Gemma Cubero del Barrio is a bilingual writer, producer, director, and teacher born in Spain with a degree in journalism born and raised in Spain. She has a passion for non-fiction storytelling using also multimedia. During the 20 years she has worked in documentary film, Gemma has managed productions from location scouting to interviews in Spain, United States, Mexico, Cuba, Germany, Argentina, Hawai'i, and the Cook Islands. Her work through her documentary production company Talcual Films as Ella Es El Matador (She Is The Matador) and Homecoming has been supported by institutions such as PBS, Corporation for Public Broadcasting, Pacific Islanders in Communication, United Nations Global Environment Facility for Small Grant Program, Latino Public Broadcasting, Tribeca Film Institute, Point of View, the Spanish Embassy, the San Francisco Foundation, and the United Nations Development Program among others. Gemma also worked as an Associate Producer and Investigator on the award- winning documentary Señorita Extraviada by Lourdes Portillo's and produced with Julio Medem two feature length documentaries What's Under Your Hat? and One Percent: Schizophrenia, both with theatrical and DVD release in Spain.

Gemma combines her filmmaking with teaching at the University of Hawaii as a visiting lecturer. She was nominated for the United States Artists Fellowship and awarded an Annenberg Fellowship to obtain her M.A. at the University of Southern California. Her latest documentary Ottomaticake premiered at the 37th Hawaii International Film Festival, screened at the Doris Duke Theater, the Roxie Theater in San Francisco and was featured in MovieMaker.com Magazine. (07/19) 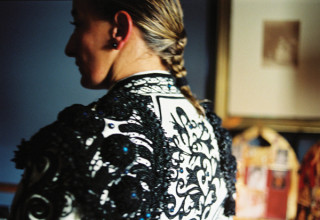 For Spaniards—and for the world—nothing has expressed their country’s traditionally rigid gender roles more powerfully than the image of the male matador. So sacred was the bullfighter’s masculinity to Spanish identity that a 1908 law barred women from the sport. Visually stunning and beautifully crafted, ELLA ES EL MATADOR (She is the Matador) reveals the…