Heather Rae is a veteran filmmaker from a high-mountain upbringing and a radical orientation. She produced and directed the acclaimed documentary Trudell, which tells the story of Native American movement leader and poet, John Trudell; produced and directed feature documentary and Showtime Premiere First Circle, about the foster care system in the American west; and produced Frozen River for which she won the Paiget Producer Award. Frozen River won the Grand Jury Prize at the Sundance Film Festival and was nominated for two Academy Awards, as well as nine Gotham and Spirit Awards. In addition, Rae has produced such feature films as Sundance premiere The Dry Land starring America Ferrera, feminist comedy Ass Backwards, Bull (2019 Cannes Film Festival), I Believe in Unicorns from writer/director Leah Meyerhoff, and Netflix Originals Tallulah starring Eliot Page and Allison Janney and Dude from Blacklist script by Olivia Milch. Formerly Rae ran the Native Program at the Sundance Institute and was a programmer at the Sundance Film Festival. She has an overall deal at Amazon Studios and is producing such shows as Outer Range, starring Josh Brolin. As a speaker and social critic, Rae's work focuses on deepening the dialogue of reconciliation and responsibility in the Americas. She was recently named one of Variety’s Ten Producers to Watch. (09/20) 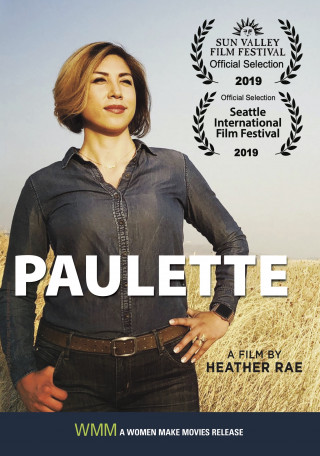 PAULETTE is an inspiring short film that follows the historic campaign of the first Native American candidate -- as well as the first woman -- to win the Idaho Primary for Governor. Coeur d’Alene tribal member Paulette Jordan comes from a long line of ancestral leadership deeply connected to the land of Idaho. The single…