Ibtisam Salh Mara'ana, a Palestinian Israeli citizen, was born in Paradise in 1975. She studied cinema the school of film and television at the Jewish-Arab academic center of Givat Haviva and has since directed a number of documentaries focused on the women of her native land. Mara’ana began her career directing a number of reports for the programs "Feminine Outlook" and "Arabeska," on Israel's Channel One, and assistant directing films with Simon Bitton, Ram Levi and Duki Dror. Her first film, Paradise Lost, is a documentary about Paradise, her hometown, a small fishing village. Other works by Mara’ana include Wake Up to the Native Land, a film about unrecognized Palestinian villages inside Israel which aired on Israel’s Channel Two and 3 Times Divorced, about a Palestinian woman’s abuse at the hand of her Arab-Israeli husband.
Mara’ana’s most recent film, Lady Kul el-Arab, tells the story of Duah Fares, the first Druze woman to participate in the Lady Kul el-Arab beauty pageant for Arab women. Guided by fashion designer Jack Yaakob, Duah even takes part in the more prestigious Miss Israel contest and works towards an appearance at the Miss Universe Pageant and an international career despite death threats from those in her strictly conservative Druze community. Lady Kul el-Arab was shown at the Massachusetts Multicultural Film Festival and is set to show at the 2009 International Documentary Film Festival, Amsterdam. (08/09)

How does a Palestinian woman in Israel survive an abusive husband? When Gaza-born Khitam’s abusive Arab Israeli husband divorces her and gains custody of her six children, she suddenly finds herself fighting two heart-breaking battles: against the Sharia Muslim court to get her children back, and against the state of Israel, which considers her an…

END_OF_DOCUMENT_TOKEN_TO_BE_REPLACED 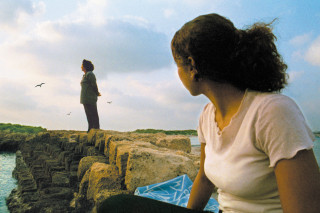 Arab Israeli filmmaker Ibtisam Salh Mara'ana grew up in Paradise (Fureidis in Arabic), a small fishing village overlooking the Mediterranean. One of the few Arab communities remaining after the 1948 war, Paradise became culturally and politically isolated as Jewish settlements sprung up around it, and today it is a place defined by silence and repression.…