Kara Herold's films employ wit, provocative storytelling, and dynamic visual assemblages to comment upon the uneasy intersections between the real life challenges contemporary women face and hidebound cultural expectations and institutions that may limit their life choices. She has written, directed, and produced films ranging from short animations to award-winning documentaries. Grrlyshow, about the girl zine explosion in the 90s, premiered at Sundance in 2001 and is distributed by Women Make Movies. Bachelorette, 34, a humorous take on society's obsession with marriage viewed through a mother-daughter relationship, premiered at the International Documentary Festival and played at the Documentary Fortnight at MoMA in 2009. Bachelorette, 34 is distributed by New Day Films.

Her awards and grants include support from the San Francisco Arts Commission, Pacific Pioneer Fund, and Film Arts Foundation. She is currently in post-production on 39½, for which she received a New York State Council for the Arts Grant.

Kara Herold received an MFA in Cinema from San Francisco State University. She worked at Yerba Buena Center for the Arts for twenty years and was a stagehand for the International Alliance of Theatrical Stage Employees, Moving Picture Technicians, Artists and Allied Crafts of the United States. She is currently an Assistant Professor in the Department of Transmedia at Syracuse University. (07/19) 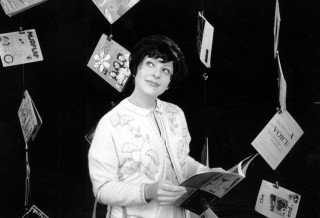 An 18 minute explosion of fringe feminism and print media, The GRRLYSHOW is a powerful and rebellious message from new voices often left unheard. Filmmaker Kara Herold examines the girly Zine revolution and culture in such a way that the film intellectually and stylistically addresses anyone's question concerning whether or not feminism has reached it's…