Rebecca M. Alvin, a native New Yorker, originally worked towards a career in music, studying at the prestigious Berklee College of Music, when she got sidetracked with a Film Scoring major at that same institution. This major led to a Filmmaking major at Emerson College in Boston and eventually to her intensely personal student film, UNTITLED (NO.1) which won finalist honors at the 1994 Visual Artists Film & Video Competition in San Jose, CA. Rebecca moved on to edit and produce numerous corporate and medical tapes in New York, before returning to more creative pursuits with the 1996 film, VOICES, which screened at the Utah Short Film & Video Festival.

Her first documentary, OUR BODIES, OUR MINDS, a feature-length exploration of feminism and sex work, premiered in 2001 at the 20th Annual Women in the Director's Chair International Film & Video Festival in Chicago and went on to screen worldwide. Shortly after that, Rebecca completed her MA in Media Studies at the New School for Social Research in New York City and relocated to Cape Cod in 2000. After completing a tribute documentary about Broadway actress Rose Inghram, (commissioned by the Rose Inghram Trust), she began work on WOMEN OF FAITH, a film about women and the Catholic Church. Alvin teaches film at The New School, Curry College, and Cape Cod Community College and writes for numerous publications, including Cineaste and the Journal of Film and Video. She is also editor of Provincetown Magazine and founder of the Cape Cod Film Society Screening Series. (01/20) 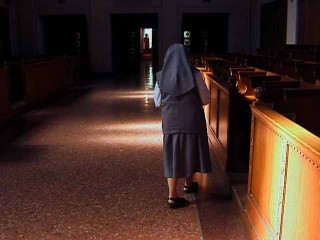 Women of Faith Women of the Catholic Church Speak

This absorbing documentary examines women’s decisions to lead religious lives in the Roman Catholic tradition in the post-feminist era. Throughout history, nuns were given certain advantages over other women, while still oppressed within their vocational pursuits. They were taught to read and write, encouraged to pursue music, literature, art, philosophy and spirituality, and officially allowed…