Ruth Behar, a Cuban-American anthropologist and writer, was born in Havana, Cuba, and grew up in New York. She was twenty-six when she received her Ph.D. in cultural anthropology from Princeton University and she is now the Victor Haim Perera Collegiate Professor of Anthropology at the University of Michigan. A writer, a cultural anthropologist, and a modern nomad, Behar has lived and worked in Spain, Mexico, and Cuba. She is known for her humanistic approach to understanding identity, immigration, and the search for a home in our global era.

In 1988, Behar was the first Latino woman to be awarded a MacArthur fellowship and she is also a recipient of the Belpré Medal. Her research on the dwindling Jewish community in Cuba is also the focus of her film, ADIO KERIDA (2002). It featured camera work and editing by her son Gabriel Frye-Behar and has been shown in festivals around the world. (01/20) 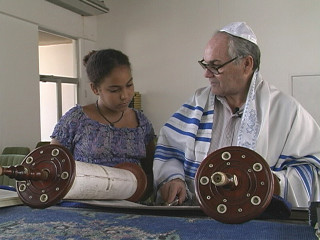 Distinguished Anthropologist Ruth Behar (recipient of the MacArthur Fellowship) returns to her native Cuba to profile the island’s remaining Sephardic Jews and chronicle her family’s journey to the U.S. as Cuban-Jewish exiles. Highlighting themes of expulsion and departure that are at the crux of the Sephardic legacy, Behar seeks reconciliation with Cubans on the island…